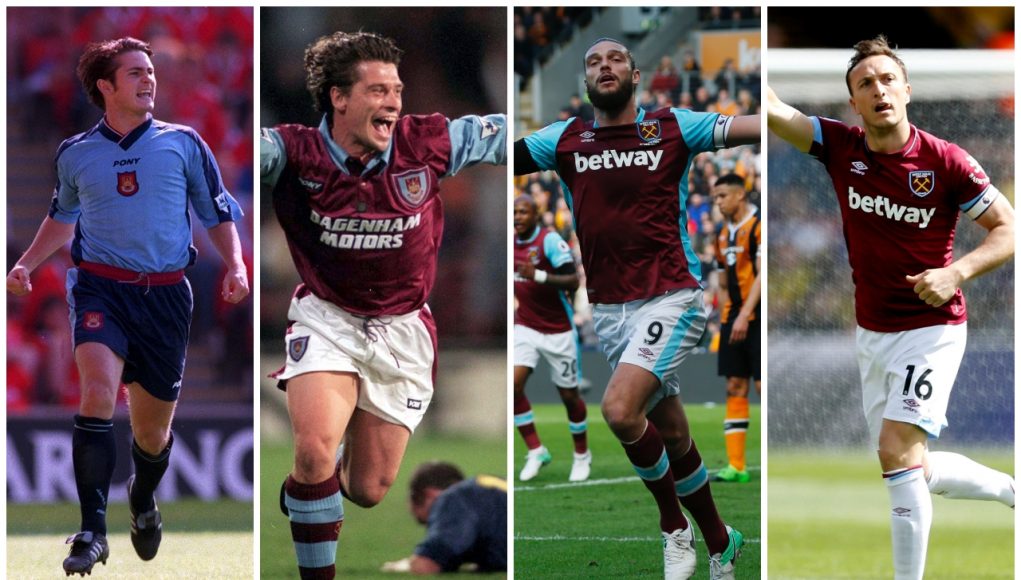 West Ham’s top 10 Premier League goalscorers are made up of some legends of the game, let alone the club.

During the Premier League era, the club has had 157 different goalscorers, 31 of which only have a single goal to their name while only 31 different players have made it to double figures in the top-flight while playing for claret and blue.

So we’ve not exactly been blessed with goal machines over the last 30 years or so, but there have been some who have stood out more than others.

The likes of Marlon Harewood, Dean Ashton, Diafra Sakho, Julian Dicks, Paul Kitson, Paulo Wanchope and Marko Arnautovic are all remembered as some of the best goalscorers we’ve had in the top-flight era, but amazingly none of them sit in the top 10 Premier League goalscorers for the club.

Arnautovic sits in 11th with 21 goals, while Julian Dicks is 12th with the same total.

But the top 10 has some big names in, and two of them are going head-to-head in a race to the top of the pile. 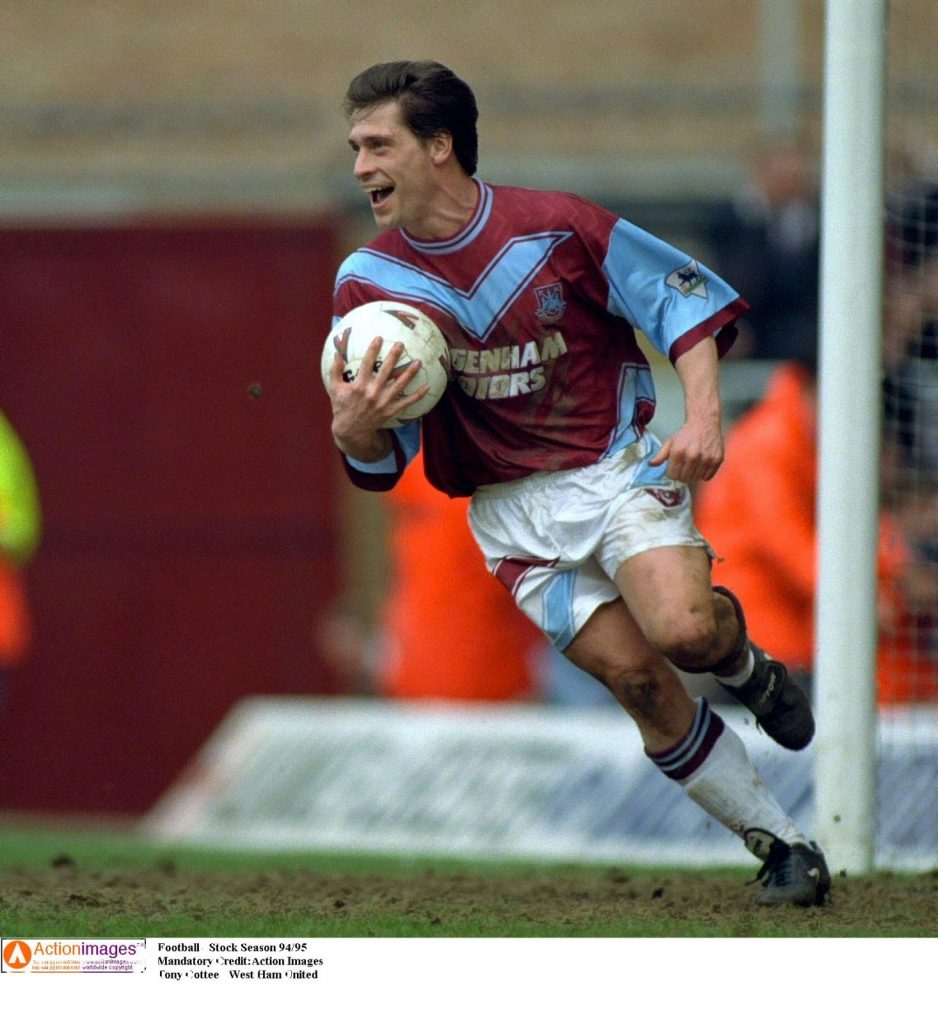 Tony Cottees scored the majority of his 146 West Ham goals in the old Division One, but he netted 23 Premier League goals in claret and blue between 1994 and 1996.

He scored his first Premier League goal for the club in a 1-0 home win over Aston Villa in September 1994 and his last also came against Villa in a 1-1 draw at Villa Park.

Between those two goals, Cottee scored a hat-trick in a 3-0 win over Manchester City in December 1994, a haul that sparked a run of seven goals in six Premier League games. 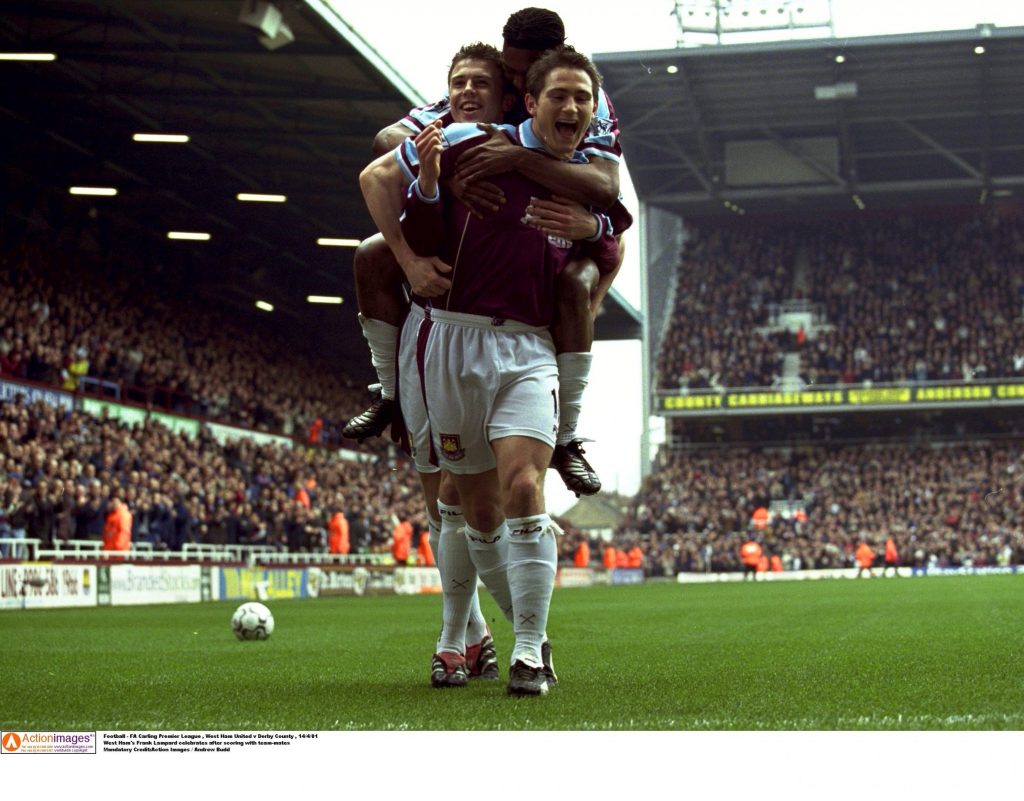 Everyone knows the history between Frank Lampard Jnr. and West Ham fans, but he was a lethal goalscorer from midfield during his time in claret and blue.

After making his Premier League debut in a 3-2 home win over Coventry City in January 1996, it took him until his 19th appearance for the club to score his first goal – the winner a 2-1 win away at Barnsley in August 1997.

Lampard’s final goal for the club, before his controversial switch to Chelsea, was a penalty in a 2-1 away defeat to Newcastle in April 2001.

His Premier League record for West Ham reads as 24 goals and 19 assists in 148 appearances. 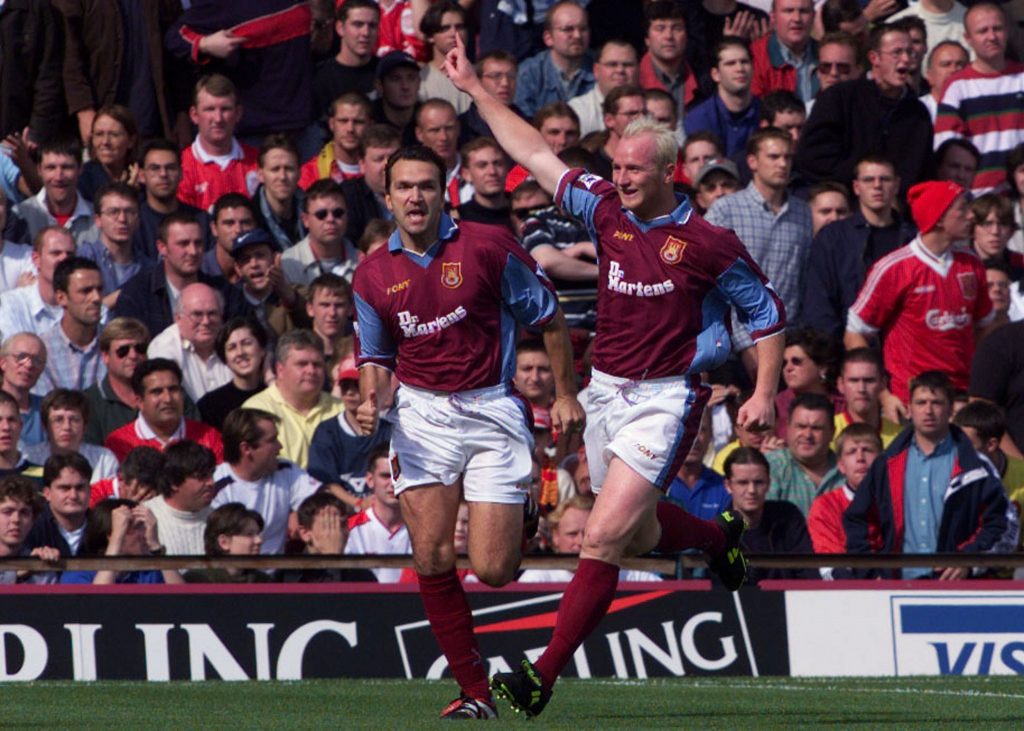 John Hartson signed for the club from Arsenal in February 1997 for £3.2m and instantly became a cult hero at West Ham.

His first Premier League goal came in an enthralling 4-3 home win over Spurs in just his second game for the club, which sparked a very consistent goalscoring run that took him through to his 24th and final Premier League goal, which came a 2-0 win over Coventry City in December 1998.

His Premier League record for the club reads 24 goals and eight assists in 60 appearances. 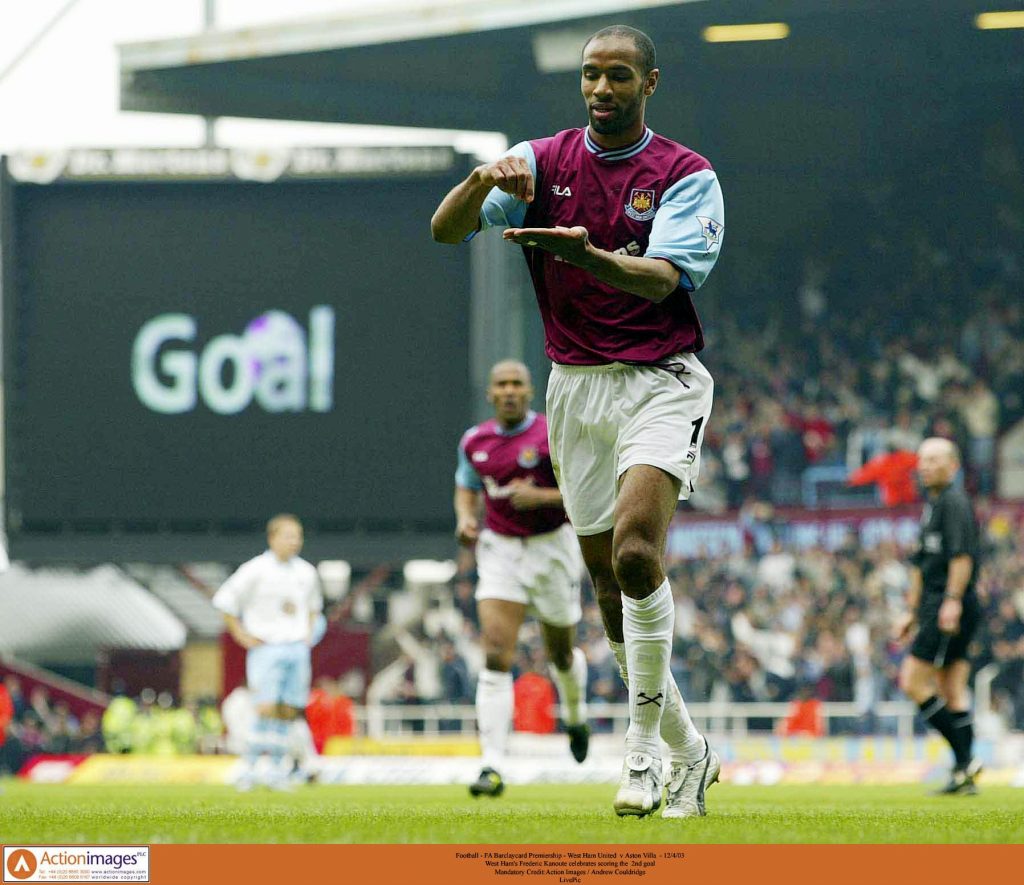 Frederic Kanoute signed from Lyon in a £3.75m deal in 2000 and won the hearts of the Hammers faithful instantly by scoring on his debut in a 2-1 home win over Wimbledon.

His best goalscoring run for the club came in December 2000, when he scored five in four games, including a brace in a 5-0 home thrashing of Charlton.

Kanoute was one of the most consistent goalscorers the club has ever had in the Premier League era, and the last of his 29 goals was the winner a 1-0 win away at Manchester City in April 2003.

He was sold to Tottenham for £3.5m just a few months later following the club’s relegation, with his final Premier League record for the club standing as 29 goals and four assists in 84 appearances. 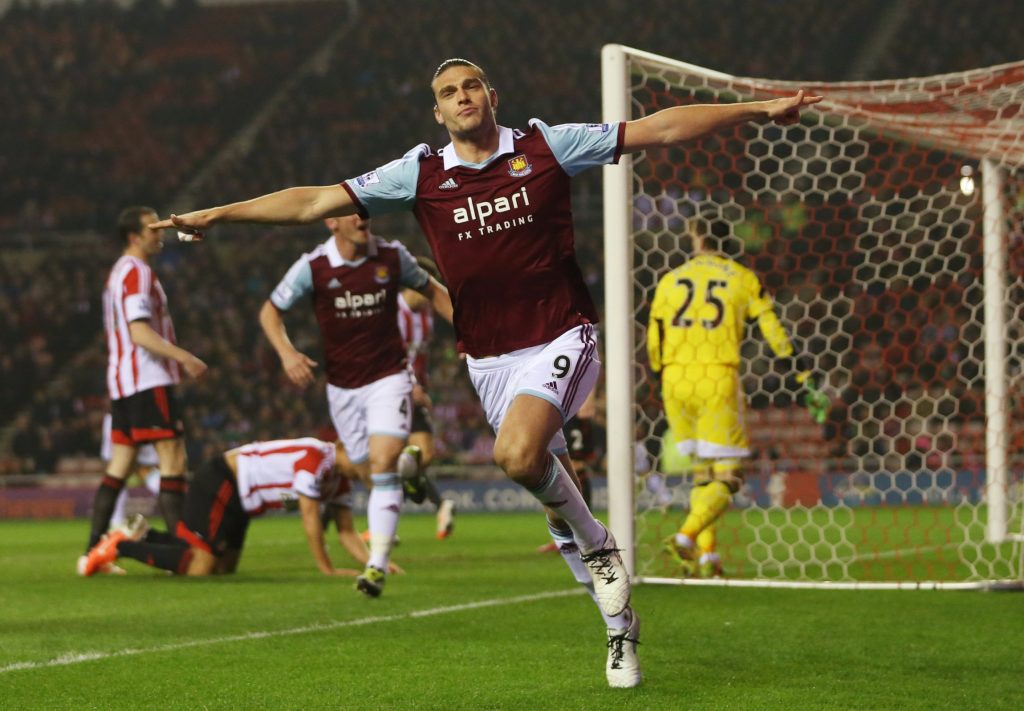 Given he spent seven seasons at West Ham between 2012 and 2019, it’s crazy that Andy Carroll only managed to scored 33 goals in 126 Premier League appearances for the club.

We all know the reality is that injuries dominated his time in claret and blue and he essentially became a bit of a bench player, making 42 top-flight appearances as a substitute during that period.

It took him some time to score his first goal after initially joining on loan from Liverpool in the summer of 2012. That goal came in his ninth league appearance for the club, which was a 3-1 defeat to Spurs at White Hart Lane.

The striker never hit double figures in a single season for West Ham, his best return being nine in the 2015/2016 season, but he did have some iconic moments regardless.

His hat-trick in a 3-3 draw with Arsenal at Upton Park is a particular highlight, while that bicycle kick against Crystal Palace at London Stadium will go down in Premier League history.

But all in, Carroll’s time at the club was incredibly underwhelming and had he not suffered so much with injuries, there’s no doubt he would probably be number one on this list. 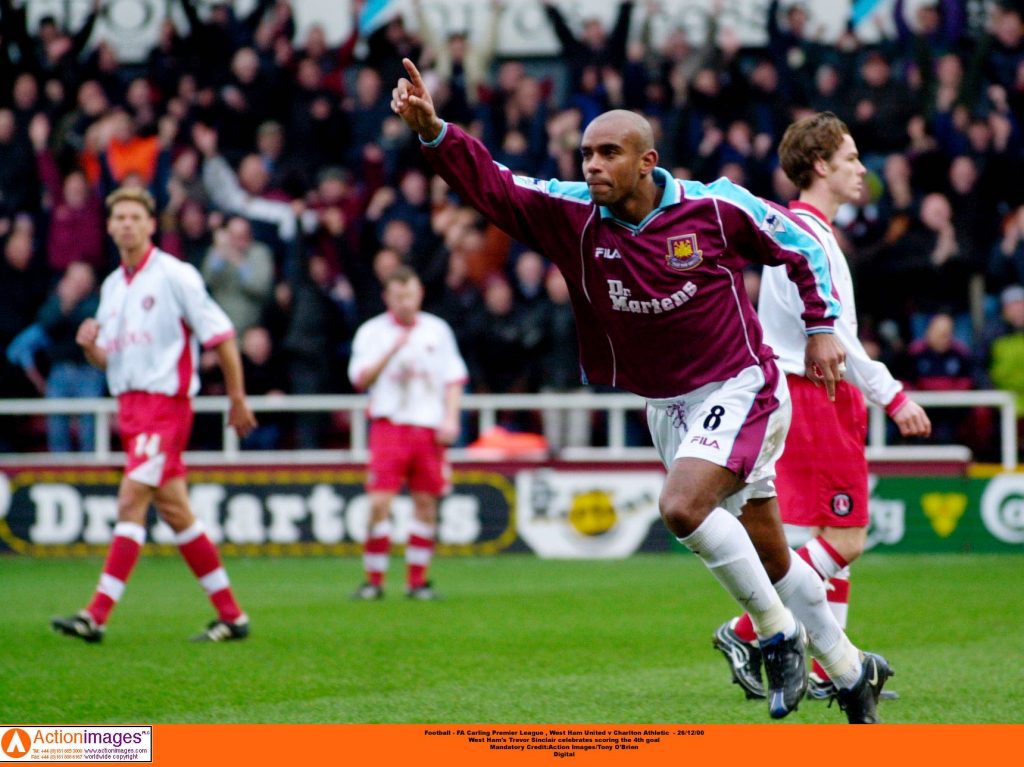 Trevor Sinclair is arguably one of the best players to have represented the club in the Premier League era, having made 177 league appearances between 1998 and 2003.

He signed from QPR in January 2008 and scored a brace in a 2-2 home draw Everton on his debut. That was the first of four different braces during his time at the club, before his final goal for the club came in the 1-0 home win over Middlesbrough, a month before the club was relegation on the final day of that campaign.

Sinclair’s final Premier League record for the club stands at 37 goals and 19 assists in 177 appearances. 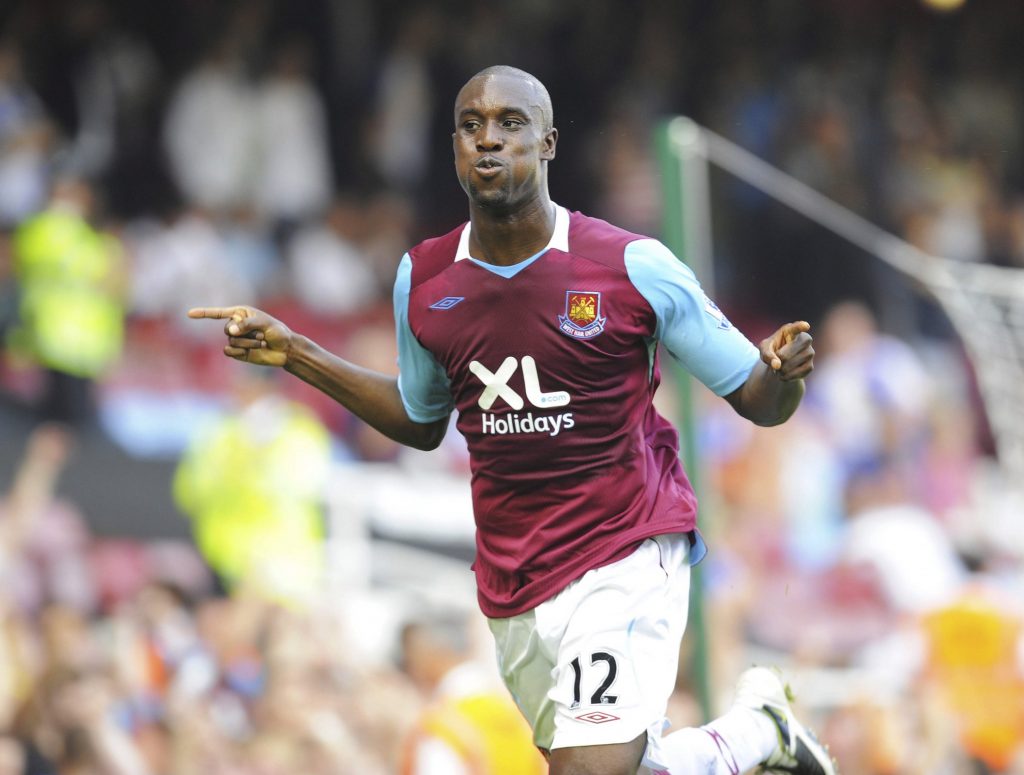 Carlton Cole spent almost a decade at West Ham, netting 68 goals in 393 appearances in all competitions.

Forty of those goals came in the Premier League, having netted his first with his first touch in a 3-1 win over Charlton on the opening day of 2006/2007 season.

That would spark the beginning of a wonderful relationship between Cole and the Hammers faithful, with his work rate, passion and loyalty earning him hero status amongst fans for the remainder of his time at the club. 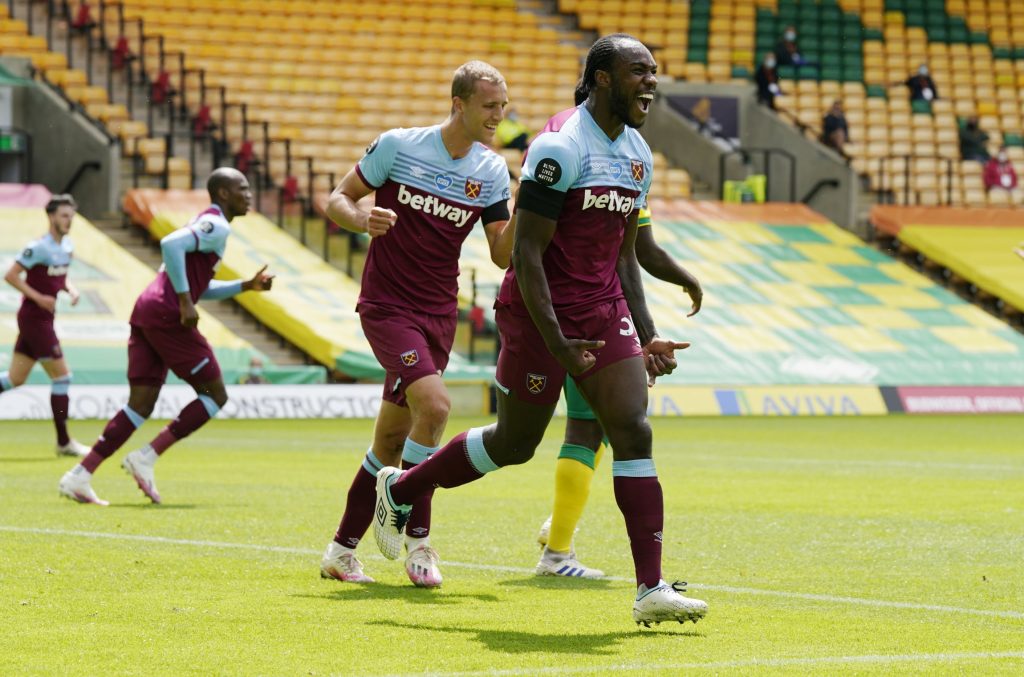 Michail Antonio is the man tipped to reach the top of this list in the near future, maybe even by the end of the 2020/2021 Premier League season.

For a player who joined the club as a winger, spent a season playing as a right-back/wing-back and is now the club’s only main striker, it’s amazing how he’s managed to score so many goals since he signed from Nottingham Forest in 2015.

Antonio’s first Premier League goal for the club in his 7th appearance – in a 2-1 home win over his former club, Southampton – and he didn’t hit double figures in the Premier League until his 5th season.

During his time at the club, Antonio has scored so many historic goals. He scored in the final ever game at the Boleyn Ground, was the first away player to score at Tottenham’s new stadium in April 2019 and became the first West Ham player to score four goals in one Premier League game in July 2020.

Over the last 18 months, the forward has become of the best goalscorers at the club, scoring 17 goals since football restarted after the pandemic.

He’s now just three goals from becoming the club’s top scorer in the Premier League era, and it’s arguably a case of when, not if, he’ll make more history at the club. 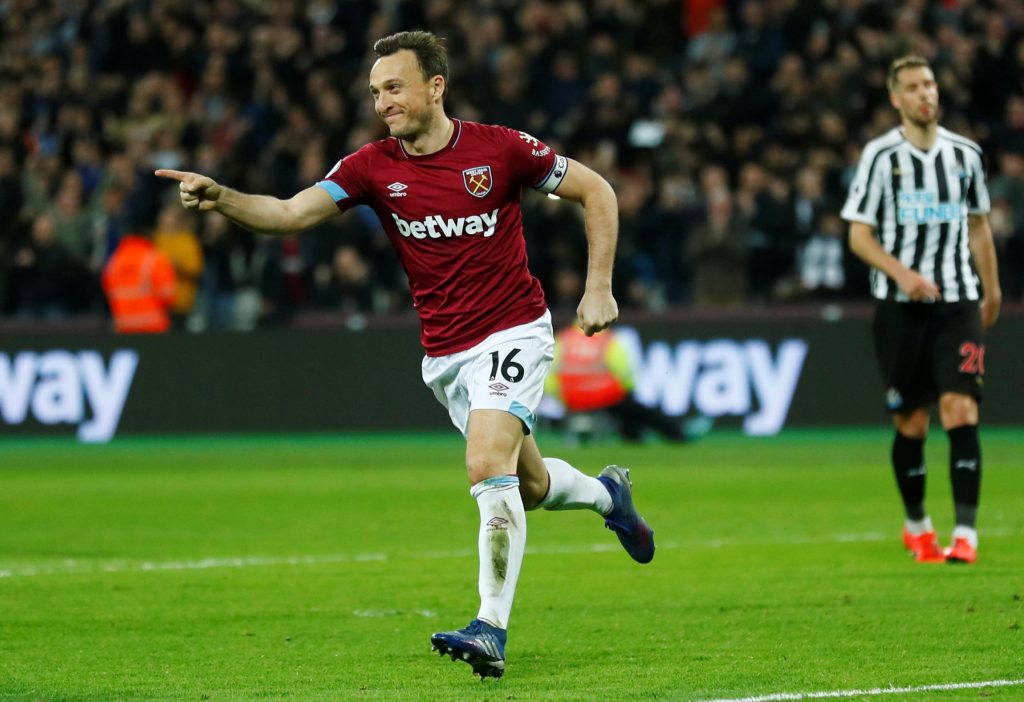 Mark Noble hasn’t just made more Premier League appearances for West Ham than anyone else (402), he’s very close to topping the goalscoring charts as well.

The legend has one more year left at the club, so reaching the top isn’t entirely out of the question, but the fact he’s scored so many goals from midfield remains an impressive feat.

His first Premier League goal for the club came in that infamous 4-3 home defeat to Spurs and since then, via 27 Premier League penalties, Noble has netted 46 goals in the top-flight and 60 in all competitions.

His most recent came from the penalty spot in a 4-1 away defeat to Leicester City in January 2020, but he’ll no doubt add to his record before eventually hanging up his boots at the end of next season. 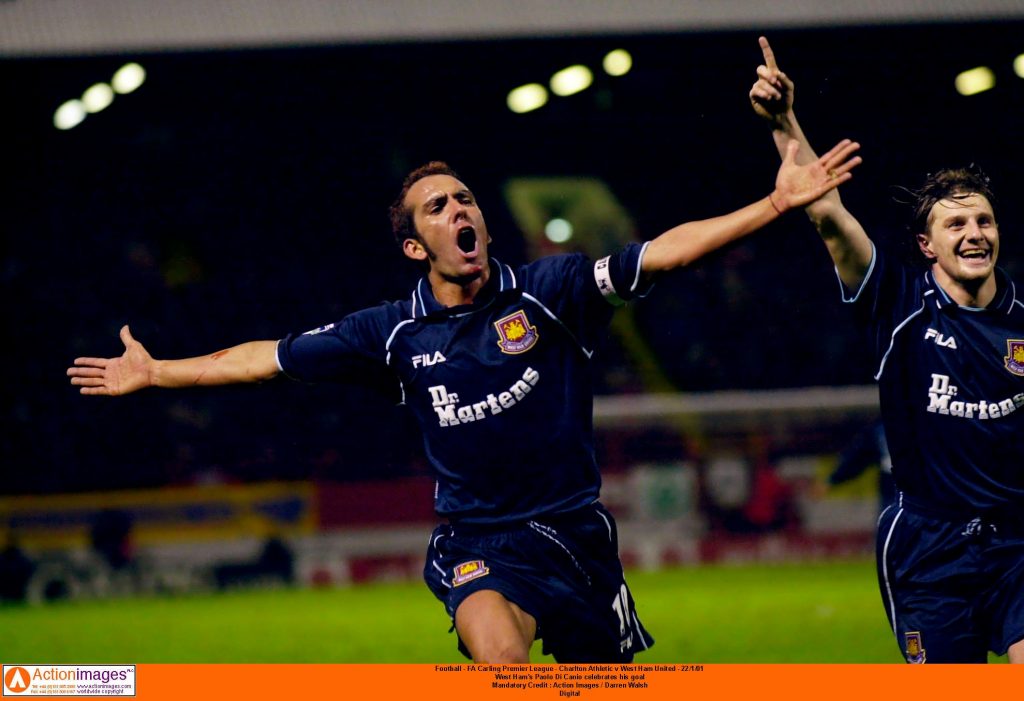 There’s not much to say about Paolo Di Canio’s West Ham career that you won’t already know.

He’s the scorer of the Premier League’s greatest ever goal and a man who had absolutely everything Hammers fans want to see in a player – flair, skill, passion, ability and unpredictability.

The Italian’s first Premier League goal for the club came in February 1999, in a 2-0 home win over Blackburn Rovers, with his last coming on the final day of the 2002/2003 season in a 2-2 draw with Birmingham City, which also proved to be his last appearance for the club after we were relegated.

With 47 goals in 118 Premier League appearances, Di Canio is West Ham’s all-time top scorer in the division, but surely it won’t be long before there’s another goalscoring king in East London.