West Ham welcome the newly crowned champions Manchester City to the London Stadium on Sunday for another critical step in our attempts to stave off relegation.

While I am not confident of our chances, we should be using this game as a preparation for the all-important fixtures against Leicester City and Everton, respectively.

David Moyes should be using this game to work on our ability to improve our tactical play and sustain momentum over a 90 minute period. In recent games (including the 4-1 loss to Arsenal), we have played very well for periods, but have taken the foot off the pedal at other times, resulting in poor concentration and leading to a loss of shape in formation.

In addition, this could be an ideal time to include a couple of our best U23s, who can add pace and creativity to our play; my choices are Marcus Browne and Nathan Holland for some playing time. Domingos Quina and Sead Haksabanovic may also be in contention. The bottom line is our ability to maintain team and player confidence, irrespective of the ultimate outcome.

For the specific purposes of this game, I am suggesting starting with a staggered 5-3-2 formation, which has the flexibility to quickly transform into a 4-4-2 shape (regular or diamond variation) at any time. 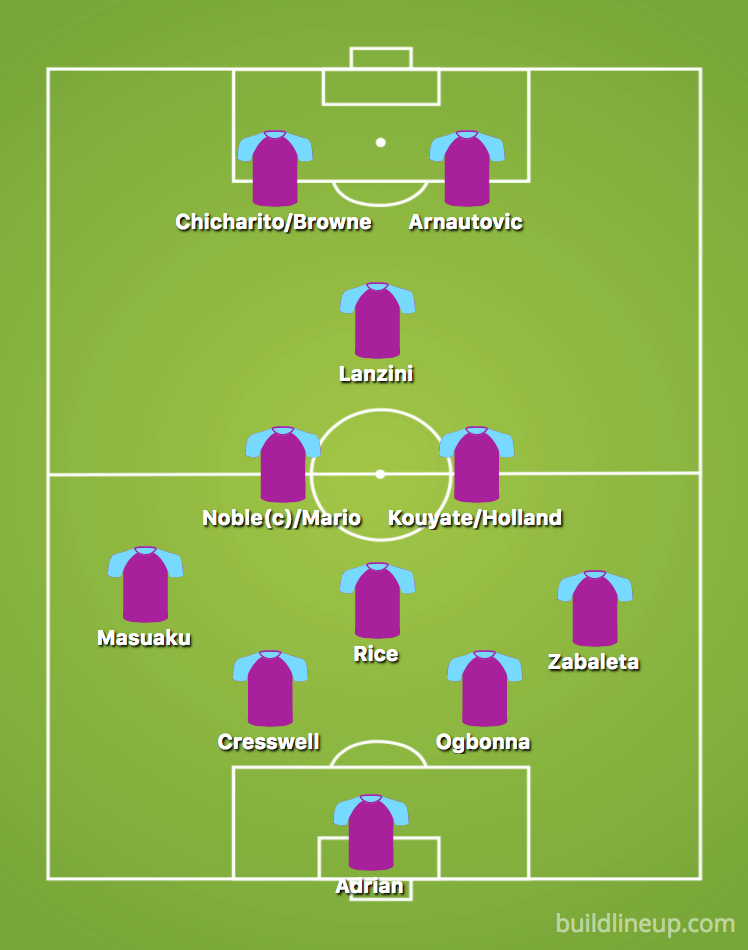 The positioning of young Declan Rice is of particular importance. Call him an advanced defender or a defensive midfielder, the label is not important. He has shown an unusually sophisticated set of skills, which will surely be called on in this match.

Ahead of the back four, he has the joint responsibility, together with Angelo Ogbonna, of keeping Kevin de Bruyne quiet, in addition to providing accurate passing to the midfielders. I have picked out de Bruyne, since he is their main playmaker; given too much liberty, and he can be very hard to hold down.

By positioning Rice in an advanced position, it allows him to quickly join the midfield in counter-attacking positions, effectively creating a 4-4-2 formation. In such circumstances, it is imperative that Aaron Cresswell and Angelo Ogbonna make the appropriate positional adjustments to cover the space left by the advancing Rice.

In order to buffer the defence, I have suggested that Masuaku and Zabaleta initially adopt a deeper position as left and right wing-backs, respectively. This is a big ask, since they may also be expected to press up-field when required. This will be no problem for Masuaku, who has enjoyed a great season-his running (down the left wing and diagonally) seems to get the Hammer fans excited every time he gets going.

The mercurial Pablo Zabaleta, by contrast has also been playing his heart out, but he may tire toward the end of the game. While I have suggested Nathan Holland as a possible substitution for Cheikhou Kouyate, he could also be used as a sub for Zabaleta, adding ‘fresh legs’ and creativity for moving against a tiring Citizens team. Like Masuaku, Holland has the option as acting as a quasi right winger or moving inward and diagonally to strengthen the midfield.

I have suggested placing Manuel Lanzini in a central attacking midfield position, where he should be playing (as opposed to playing out wide); in addition to all of his expected roles, one important role which he should be given, is to make sure that our twin strikers receive an adequate supply of passes. In this regard, the likes of Masuaku, Rice, Noble, and Kouyate must get their ‘passing game’ to near perfection.

They have the choice of advancing the ball via short passes to Lanzini (and running forward for the rebounding wall pass), longer passes to Arnautovic and/or Chicharito, or if spaces open in the City defence, running into them, before passing.

The two starting strikers pick themselves, with Chicharito running off the rampaging Arnautovic.

Anything that is poorly cleared by the City defence becomes the role of Lanzini and the other advancing midfielders to mop up, in order to help sustain any attacking movements. If Chicharito has problems getting into the game, then Marcus Browne, who hit 4 goals against the Everton U23s in a recent game, is my choice for some playing time.

Another person who could start or be used as a critical substitution, is Joao Mario, who is one player I’d like to see our club sign on a permanent deal. I have pencilled him in to replace a possible tiring Noble, although he is quite capable of playing in a variety of positions.

Good fortune has restored Adrian back to the No1 custodian role. I honestly believe that he would be welcomed at most Premier League clubs, and it would be sad to see him leave West Ham.

So what are my expectations from this enormous challenge against the Champions? This game can be used as a dress rehearsal for the Leicester and Everton games – a time to improve on our tactical play (we surely must be able to put together one of the simplest tactical ploys- the old but effective moving triangles).

In addition, a couple of goals against the Citizen’s will do much to keep the team buoyant for the games we are capable of winning. That said, we should try our best to get something from this game with all the odds stacked against us.

Time for the West Ham Way to arise from the abyss!