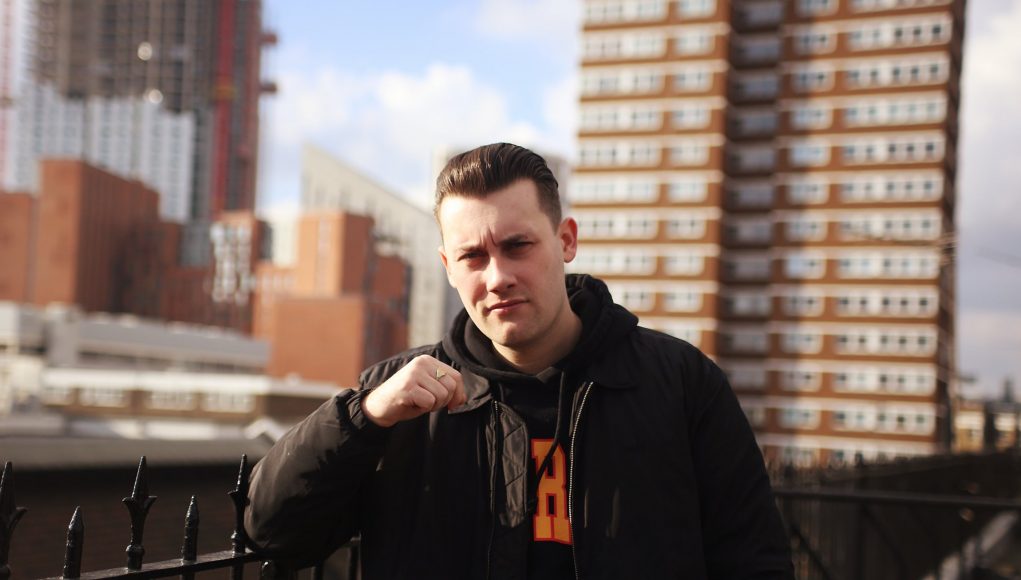 Music and West Ham kind of go hand in hand. Walk in to most pubs in and around Stratford and East London on a matchday and you’ll no doubt find a DJ spinning off the classics as hundreds of Hammers fans dance and sing along, almost always to the likes of Sweet Caroline, The Cockney Rejects, Twist and Shout among others.

It’s in our blood, none more so than in Barking-born Joseph J. Jones, who is becoming quite the breakthrough artist in the U.K.

Joseph is also a massive West Ham fan, so when I was offered the chance to have a chat with him I jumped at the opportunity.

While researching Jones ahead of our interview, it didn’t take me long to realise just how much of football fan he is, let alone a massive West Ham fan. The night before our chat he was on Twitter raving about the fact BT Sport had used the soundtrack to his single ‘Crawl’ over the highlights of Liverpool’s thrashing of Roma. For an up and coming artist, that must be an incredible feeling.

Such a pleasure to have my track ‘Crawl’ playing over the coverage of @ChampionsLeague @LFC game tonight! Thanks @btsportfootball
Well happy about that! pic.twitter.com/wwEZ4IeZEu

So when we did finally get down to having a chat, it didn’t take long for the topic of West Ham to take centre stage. Firstly, though, I wanted to get to know Joseph. J Jones the artist.

“My music is in the world of soulful pop and alternative music. I’m just in the middle of writing and recording a load of music, and I’m releasing an album pretty soon,” he says.

“I’m a newcomer, but have been doing it all my life really. I’m 26 now, and I’ve been singing in pubs and clubs since I was about 15. I signed with my label about two-and-a-half years ago and we’re just in the middle of releasing stuff now.”

Previously, Jones has cited Johnny Cash and Kanye West as the main influences behind his music, which is an intriguing combination.

“There are so many artists that I’m influenced by, like Sam Cooke and Frank Sinatra,” Jones explains.

“Even Oasis. Just big sounding music influences me. Kanye West and Jonny Cash are behind the focus of my upcoming album because I wanted something that was current but still old.”

Jones’ newest song Speaking in Tongues is out now and the music video will relate to a number of West Ham fans. It’s set at Harlow dog track and in one scene, Jones is donning a West Ham hat. The video has a bit of a Streets feel to it, and Jones explained to me it’s The Streets who also inspire him, particularly when it comes to his music videos.

“I love their videos because it’s always got a British culture and I love to imprint that on to my music because it’s quite a big, international type of sound so whenever the visuals come in to it I always want to keep it British,” he explained.

The song has a pretty interesting story behind it, too.

“I used to go out with a religious nutcase and we’d have conversations – I’m not particularly religious but I’m quite a spiritual person – and we’d argue to the death about the signs of life and the gods of life, stuff like that. She believed in what I didn’t believe in and we’d always end the conversations with ‘we aren’t going to agree on this, you’re speaking in tongues.’

“It’s quite a sad song because it touches on those conversations but it’s more about the break up that happened afterwards and the fact we could never really make amends because we were too far away from each other in that respect.”

Talking of break ups, it’s a felt a little bit like a break up between West Ham and the fans recently and when I ask Jones about his love for the Hammers, it’s no surprise that the next 15 minutes or so is spent discussing the owners, the London Stadium and Scott Parker’s heroics a few years ago.

David Gold and David Sullivan’s involvement in the club has been controversial, particularly over the last couple of years after they promised so much with the move from the Boleyn Ground to London Stadium, only for us to be given two relegation battles.

It doesn’t take long to know what Jones thinks about it all.

“All that stuff that happened at the Burnley game – they’ve said so many times that if the West Ham fans don’t want them there, they’d go. It’s like ‘take that as a hint, mate.’

“I don’t agree with what happened and I don’t think anybody should be treated like that, but I understand the frustrations from fans, I really do.

“What they need to do is just sell up. I don’t know what they think they’re doing; they keeping telling us they’re going to buy all these players – I read the other day we wanted Benzema! Are you having a laugh!?

“They tell the fans they’re going to buy these big players to sell season tickets, but they never buy them and then we end up with Hugill, the poor kid. He was probably buzzing when he signed for West Ham, but he’s had about 12 minutes of game time and they’re gonna sell him in the summer! I think they’re just sucking money out of us.”

Jones’ feelings about Moyes are pretty similar, too. There’s a trend in what he says and he’s absolutely right, the fans aren’t being given what they want and as a result, they’re getting very angry about it all.

Still getting over @CH14_ goal at Stamford Bridge!
Him and Arnie together are such a force….Moyes gotta play him more man! ❤️ Lil Pea #COYI

“Even down to Moyes, just give us what we want in the last couple of games and we’ll want you to be the next manager,” he continues.

“He needs to bring on those players quicker, make the substitutions faster, play nicer football, go forward. We could’ve got three points against Stoke, they were 19th in the league and they’ve conceded more goals than anyone else in the league, and what do we do? We play the most defensive football I’ve ever seen in my life.

“Poor Arnie’s up front trying to get the flair going and you can see he’s getting more gutted.

“I don’t know what it is. I think everyone feels that the owners just need to go out and buy the players they’re talking about buying and to do what they’ve promised us. They basically promised us we’d be the next Man City, and I’d bite their hand off for a bit of that now.”

“The only thing that carries that stadium is us.”

Focus then switches to the London Stadium, which is yet another false dream Gold and Sullivan sold fans. Once again, Jones hits the nail straight on the head.

“I’ll be the first one to say it with Upton Park, when the idea arose of us moving to the Olympic Stadium I was against it but when the word ‘progression’ came in to the equation, I was all for it,” he explains.

“But as soon as I stepped in to that ground I thought ‘nah!’ This isn’t home.”

It’s not a football stadium and a lot of work needs to be done in order for us to succeed there, but we as fans have the ability to create quite a good atmosphere there and it’s something Jones believes is all the fans have left.

“The only thing that carries that stadium is us [the fans],” Jones says passionately.

“The best game I went to was when we beat Spurs 1-0 at home – we got it rocking, we were on fire and for the first time I thought, ‘yeah, this is great.’

“But we’ve got to stop moaning about it now, we’ve got to make something happen because that’s our home now. I don’t know how we can change that.

“If you think about it, tourist wise it’s the Olympic Stadium so that’s got to appeal to some one with bigger pockets than the two Davids.”

“We used to play such a big role at Upton Park. Just look at Anfield the other night, we used to have that sort of ground! We’ve just got to get behind the club like we did at that Tottenham game, we need to be screaming our lungs out.”

Jones’ words get me a little emotional about what’s actually happened at the club recently. It’s time to rewind a little and look back at much happier times, so I ask Jones about his early memories of being Hammer.

“The game against Notts County [21st September, 2004] is my first vivid memory of going over there to see what it was all about and feeling the electricity.

“There was so much swearing around me, it was only the time my Dad would let me do that as a kid and let some steam off.”

And before long, we get talking about one player in particular who made a lasting effect on Jones’ love for the club.

“I used to have such fond memories of Scott Parker, he was the first super hero to me as a West Ham fan.

“I think I was in my teens when he was playing – I used to get so tired of being sad about it all the time and I’m quite an emotional guy so I took a step back from it until Scott Parker arrived and he got me back excited about West Ham.

“I used to love watching him play, so many fond memories. He saved us on more than one occasion, he kept us up quite a lot and he just carried the team. It was his super hero energy, he was a hero to me.” 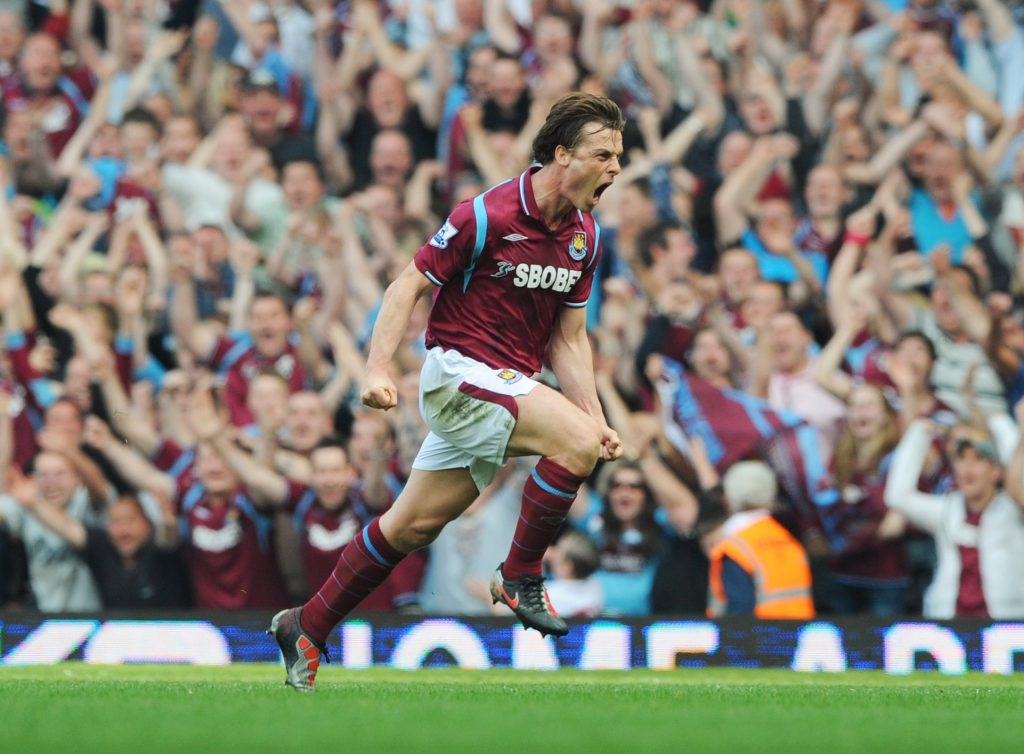 “Tevez did a good job and you can’t really talk about Payet now, it’s blasphemy.

“Where Payet is concerned, I don’t know if I hate him as much as I did anymore – was it down to the owners more than him, or did he really have a raunchy affair with a Hammerette? Who knows.

“I think something happened that scared him and he had to go. It was weird, it wasn’t right.

“But I’ve never seen a player like him. I still can’t take down the signed photo I have of him on my wall, I really want to but I can’t do it. I hate him and I love him.”

It isn’t long before the subject of the stadium arises again, though, and it’s then that I decide we should probably leave the chat on a much happier note. Jones’ reply just sums it all up.

“I hate to babble on about it but, I just miss home.”

Follow Joseph J. Jones on social media via the links below…