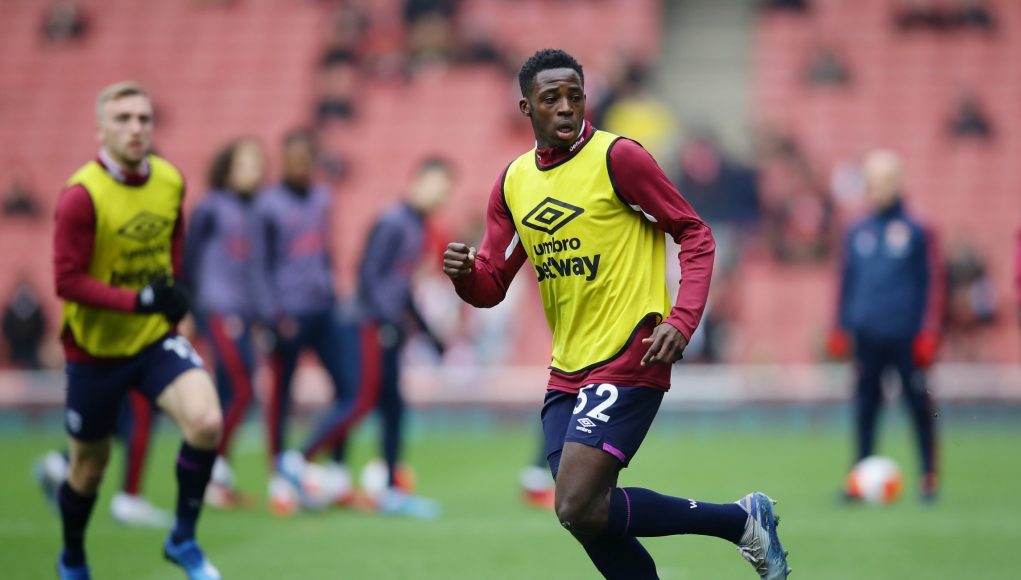 If there’s been one huge positive over the last month or so, it’s been the emergence of West Ham Academy product Jeremy Ngakia at right-back.

The 19-year-old has only made four Premier League appearances so far this season, but three of those have come against Liverpool (twice) and Arsenal, and he’s not looked out of his depth once.

Of course, Ngakia has benefitted from Ryan Fredericks’ injury problems of late and certainly offers a more youthful approach than veteran Pablo Zabaleta on the right side of defence, but it has still been impressive to see such a raw talent come in and impress against two of the Premier League’s biggest clubs.

And West Ham legend John Moncur has gone on record to praise the youngster for his recent efforts, claiming that he reminds him a little bit of Manchester United’s Aaron Wan-Bissaka.

Speaking to the We Are West Ham Podcast, Moncur said: “I think there’s a rawness about him, obviously, but he’s got a lot of natural talent.

“He eats the ground up, he looks good at times going forward, and he reminds me a little bit of Wan-Bissaka to a degree.

“He’s rangey and he’s got that sort of rawness and that that sort of length in his limbs – he’s so hard to get past so I think he’s been a real bonus.

“And when someone comes in like that, it gives the whole squad a lift because you think, blimey, we’ve got a signing here for nothing. That’s what makes the difference.”

Moncur, who was at the club during what is widely known as the club’s Golden Generation when the likes of Frank Lampard, Rio Ferdinand, Joe Cole and Michael Carrick came through the academy, was also quick to liken Ngakia to former Hammer Glen Johnson.

“It’s a little bit like Glen Johnson, he came in and we sold him after 12 games but in those 12 games he proved that he could have a good Premier League career,” Moncur added.

“You know from the third or fourth game that he was going to be a star, you know, an asset to the club, and I can see this with this boy [Ngakia]. I’m really impressed with him.

“The whole club, all the senior players, will be thinking, blimey, we want to be a part of this. We need that at West Ham, all the fans loved to see a homegrown player come through and so I’m really excited for him.”

Ngakia’s stock has certainly risen in recent weeks and while we must always be cautious in putting too much pressure on his inexperienced shoulders too soon, you can see where Moncur is coming from when it comes to his comparisons with the likes of Wan-Bissaka and Johnson.

The right-back will inevitably make mistakes, Declan Rice did during the early stages of his West Ham career, but it’s very exciting to see yet another youngster come through the academy and make a name for himself in the first team.

It would be brilliant to see him go on and make over 100 appearances for the first team like Rice has done over the last few years, and hopefully, these two can prove to be the beginning of yet another Golden Generation at West Ham.