Carroll, 23, has signed from Liverpool until the end of the season with the club having the option to make the move permanent.

Carroll told whufc.com: “It’s great to be here at West Ham and all signed up – I just can’t wait to get started now.c I want to be playing games and obviously hoping to score some goals. I know the manager well and some of the lads, so it is nice for me to come to a place where I know people.

“I’m hoping to add a lot of goals and create a few chances. I know Sam from Newcastle and he was a massive reason for me coming. When I worked with him at Newcastle it was great so it was a no-brainer really.”

The frontman became the most expensive English player ever when he signed for Liverpool from Newcastle for £35m in January 2011 but, since the arrival of new boss Brendan Rodgers this summer, his was told he was surplus to requirements.

Manager Sam Allardyce has been tracking Carroll all summer and is clearly delighted to have finally got his man.

Allardyce told the Official Website: “I think for all parties this is a great signing. Andy is an all-round footballer, but because he is 6’3” and one of his strengths is his aerial power, everybody dismisses the ability he possesses on the floor.

“Hopefully he can score goals for us and we will be in a very good position at the end of the year in the Barclays Premier League.”

Carroll is expected to make his Hammers debut on Saturday against Fulham at Upton Park. 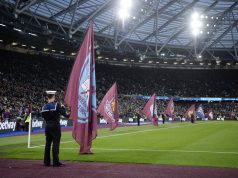