West Ham today announced the capture of experienced Wolfsburg defender Emanuel Pogatetz on loan until the end of the season.

The 30-year-old Austrian international, who can play at either centre-back or left back, has previously played in the Premier League for Middlesbrough between 2005 and 2010 and has spent the last two seasons playing in the Bundesliga for Hannover 96 and Wolfsburg.

Speaking to whufc.com, Pogatetz said: “I feel very good to be here and I am very excited about playing for West Ham.

“I am looking forward to the opportunity to play for the club and help it get good results. I will be doing my best to play well and hope I can play a part in the club achieving the targets for this season.

“First of all when I heard that West Ham wanted me, I thought it was a club I wanted to play for because they are a very traditional club, with passionate supporters.”

The Austrian, who made 158 appearances for Middlesborough, also signalled his feelings that he has unfinished business in England and insists he is still capable of playing at the highest level.

“It was good to have the opportunity to come back and play in England,” he said.

“This is the football I want to play and I have missed playing here, I want to show what I am still capable of after five years playing with Middlesbrough.”

Pogatetz is expected to go straight into the squad that travels to Fulham on Wednesday night. 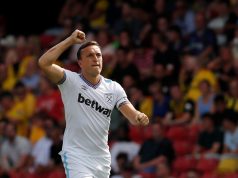