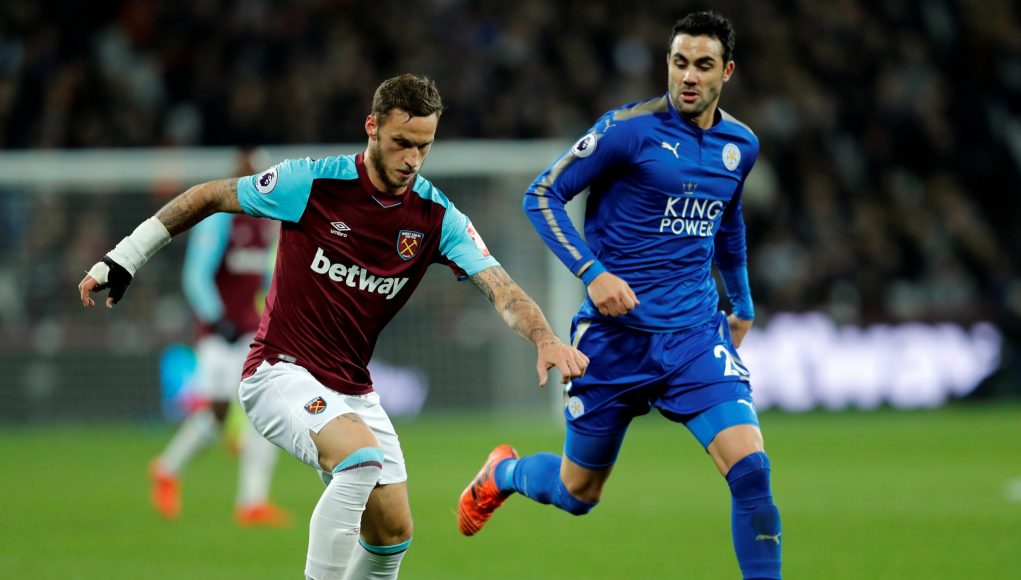 West Ham travel to the King Power Stadium to face Leicester City this weekend in another critical game as we continue to battle it out to stay in the Premier League for next season.

While the Foxes lost 5-0 last week to an ever improving Crystal Palace outfit, I would suggest that we can’t assume an automatic win on this result. The 5-0 scoreline does not reflect the full story of that game; Jamie Vardy had two relatively easy chances to score in the first half, which if successful, may have altered the complexion of the game.

Even when they were reduced to 10 men, the score remained 2-0 until the last 10 minutes when Leicester leaked three quick goals.

Vardy will be looking to atone for his quiet game, with national team selection at stake, and Kelechi Iheanacho is another player to keep an eye on. That said, Leicester have little to play for, other than to help save Claude Puel’s job. If ever David Moyes needs to get it right, this is certainly a good opportunity.

Before discussing the team, its formation and tactical approach, I think it’s only appropriate to focus attention on David Moyes. Last week, against the Premier League champions, he put together a formation with only three defenders, and included Evra and Fernandes in the starting line-up. Arnautovic was effectively isolated from the rest of the team.

This is not the first time he has made some strange decisions regarding team formation and player selection, as well as choice and timing of substitutions. So far he has only managed seven wins from 28 outings, a win percentage of only 25% – worse than Gianfranco Zola, Glenn Roeder, and Avram Grant!

In his post-match presser, following the Man City debacle, he was quick to blame Manuel Lanzini for the 4th goal, following similar public ‘compliments’ handed out to young Declan Rice. Like Claude Puel, his future is uncertain. When Moyes first arrived at West Ham, there was considerable doubt expressed over his appointment, especially following a nightmare experience with Sunderland.

Contrary to the opinion at the time, and following some extensive research, I felt that he does possess more creativity and imagination than most pundits realise – there is never a better time to demonstrate his prowess over the course of the last three games.

For this particular game, I am suggesting a modified 4-4-2 formation, which has the potential to provide width and depth across the park. 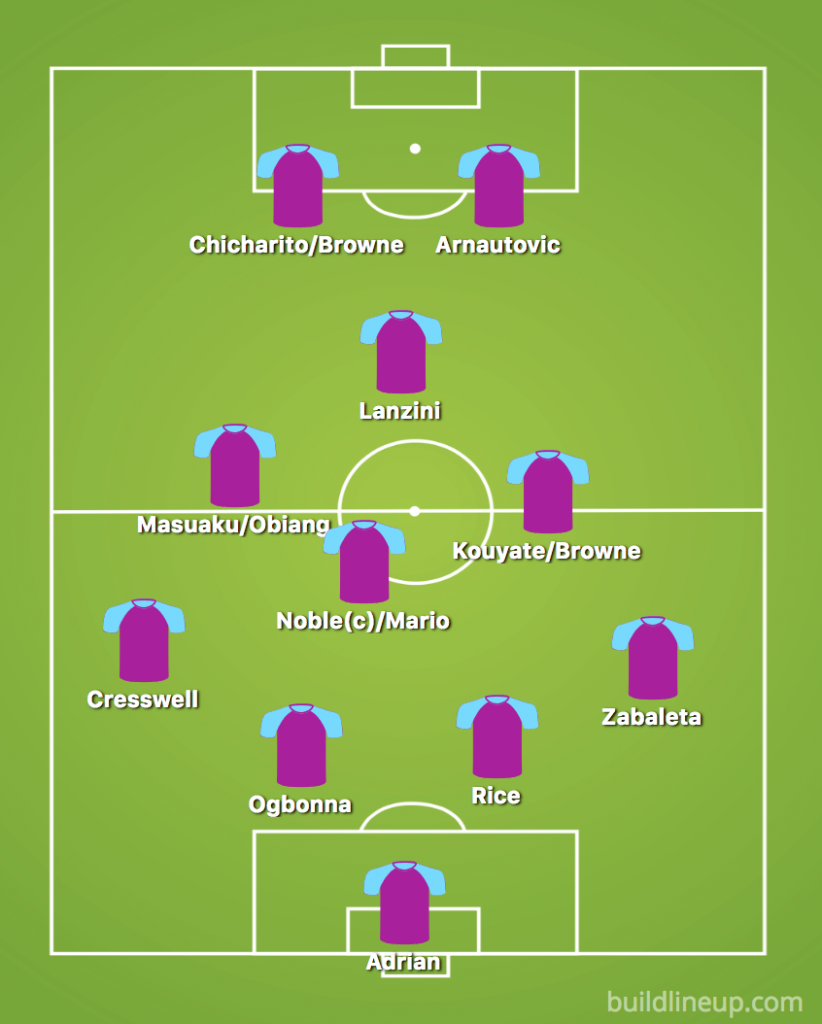 The midfield has been set up as a staggered compact diamond-like unit.

Mark Noble, Arthur Masuaku, and Cheikhou Kouyate will have the dual responsibilities of controlling traffic through the centre of the pitch and on occasion, moving forwards; Manu Lanzini should ideally be placed in a more advanced position as a central attacking midfielder, and given license to push up or adopting a deeper position, if and when required.

Provision has been made for the possible inclusion of Joao Mario and Marcus Browne to help re-enforce the midfield, should we encounter problems.

Marcus Browne is a natural playmaker who could also be used up front to accompany Marko Arnautovic, although I have suggested starting out with Chicharito for this important striking role.

At the time of writing, I believe that Pedro Obiang has been included in the squad. Should he be given any playing time, let us all hope that he still has positive memories of the fabulous goal he scored in the 1-1 draw against Spurs earlier in the season. That strike from 35 yards out was hit with enormous power and accuracy, and was no fluke. Even the presence of two goalkeepers wouldn’t have been able to stop that one. 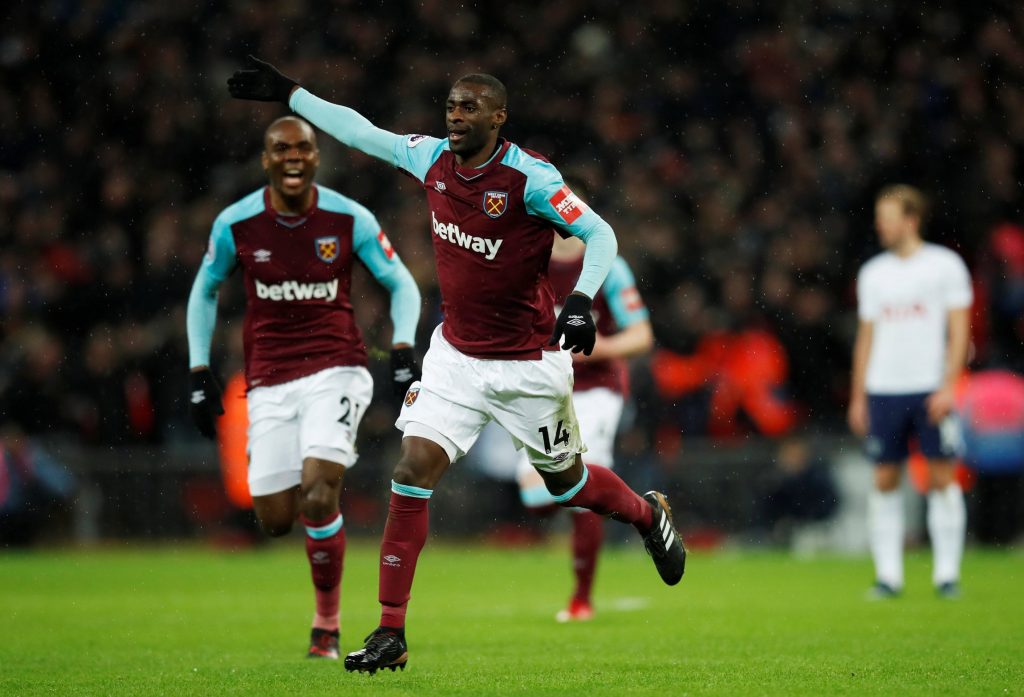 The back four would include Angelo Ogbonna and Declan Rice in central defending roles, with Aaron Cresswell and Pablo Zabaleta pushed wider and in slightly more advanced positions. Cresswell and Masuaku may be required to adopt advanced positions on the left flank, while Zabaleta, Browne, and possibly Kouyate playing similar roles on the right side.

Another possibility could involve Marcus Browne starting out as a central right midfielder rather than Kouyate; he has the pace and skills to move laterally to take up the role of a right winger, where he could be more than a handful for the Leicester City defenders. Should this option be considered, it would require Zabaleta to fill in the space vacated by the advancing Browne.

Alternatively, Lanzini could play as a right sided attacking midfielder, although I feel he is best suited in his playmaking role in the centre of the ground. Adrian remains as my first choice between the sticks.

In our last game, I can’t recall us making a contest of the game from the starting whistle.

This must be rectified in order to establish and hold the initiative. Our passing must be more sophisticated than direct vertical and horizontal passing which does little to advance the ball. We should ideally employ a variety of passing options, including penetrative diagonal passes. Diagonal passing involves players running with the ball and fellow players running off the ball into positions to facilitate this type of ball play.

For this game, I feel that it the responsibility of the team to adopt an attacking approach, rather than waiting for counter-attacking chances following breakdowns in the Leicester attack.

We have sufficient fire-power to allow us to adopt an attacking policy, and as the old saying goes, attack is the best form of defence!