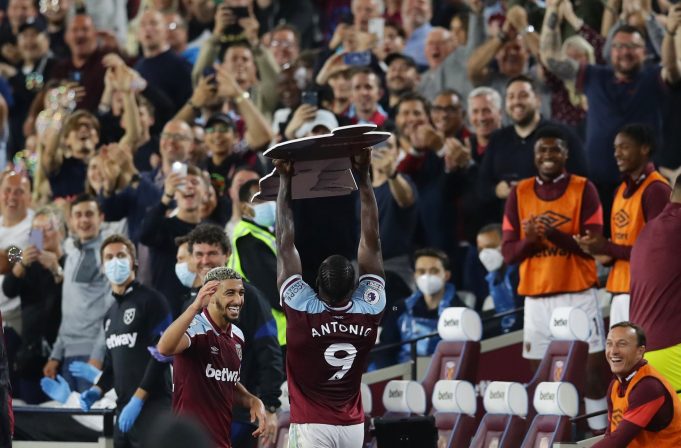 The 31-year-old equaled Paolo Di Canio’s 47 Premier League goal tally with his effort in the 4-2 victory away at Newcastle on the opening weekend of the season, before scoring a superb brace in the 4-1 thrashing of Leicester City to pull away on his own in the record charts, taking his tally to 49.

When he signed, no one ever expected a player who arrived as a winger and went on to feature heavily as a right wing-back to go on and set such an impressive record, but the forward’s transition from utility player to out-and-out striker has been so impressive over the last two seasons that it was eventually seen as more of a formality. He has now scored 51 goals in 183 Hammers appearances in all competitions.

So, as expected, Hammers fans took to Twitter on Monday night and throughout Tuesday to congratulate Antonio, who has now written himself into the club’s record books…

absolute bossman keep it up my man

What a beauty. This guy has given everything to the club and is now the leader in goals. Not too bad for a right back. @Michailantonio

Credit where it is due, Antonio started off in the West Ham team as RB and now has broken the PL goalscoring record for the club. What a goal to break Paolo DiCanio’s previous record. Full deserved. Definitely not the same team without Antonio in it.

Best celebrations in the world⚒⚒😂

Legend. I couldn’t contain myself when he scored absolutely pleased for him and so proud of him. COYI

Well done Michail. You were amazing tonight, as were the whole team. Congratulations on your new record. The goals were all fantastic. Dec made a big difference with his forward runs and assist. Great game. ⚒️