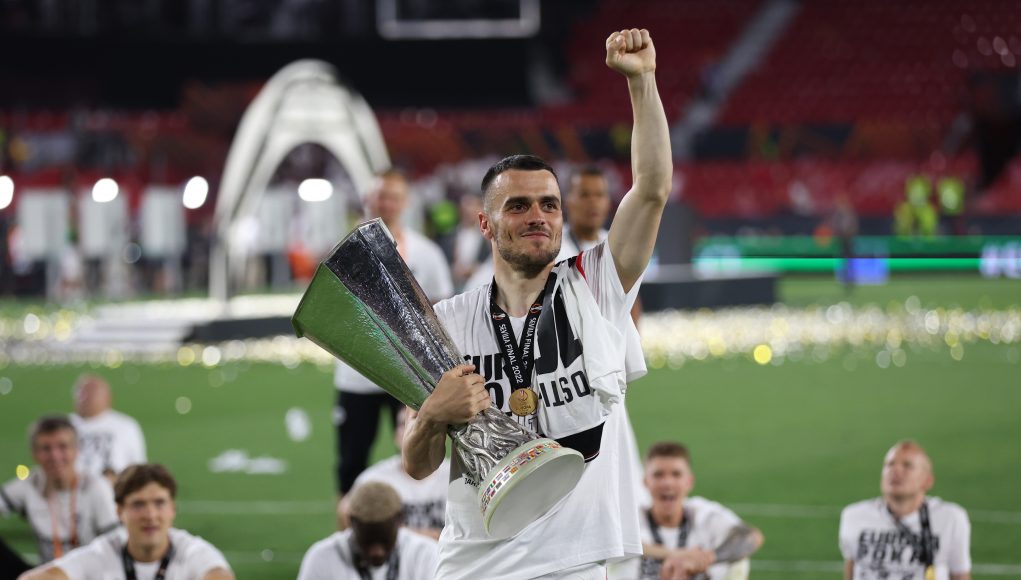 West Ham will have to convince Filip Kostic to sacrifice Champions League football in order to join David Moyes’ project in east London.

That’s according to Hammers insider ExWHUemployee, who claims the Serbia international has ‘reservations’ about signing for West Ham and giving up the chance to play in the Champions League for Frankfurt this season.

The 29-year-old was instrumental in the Bundesliga outfit’s Europa League triumph last term, registering three goals and six assists in 11 appearances before lifting the trophy, including two goals and an assist against Barcelona at the Nou Camp.

Of all the teams he faced twice in that run, West Ham were the only team he didn’t register a goal involvement against.

Via his West Ham Way Patreon page last weekend, Ex wrote: “The club had bid for Filip Kostic [and] we believe the fee is around £15m.

“It appears his club are prepared to accept it because the player only has a year left of his contract, however, personal terms are yet to be agreed.

“Kostic has reservations about giving up Champions League football and also the ability to move to any club for free next summer. Again, talks will continue today [Sunday].”

Given his vital role in Frankfurt’s historic Europa League run and being a huge reason why they will be playing in Europe’s premier competition in 22/23, it’s understandable that Kostic is reluctant to give all of that up for a chance to play in the Europa Conference League with West Ham this season.

Kostic has never played in the Champions League and with his 30th birthday arriving later this year (November), he may be wondering whether this is his last chance to feature in such a prestige competition.

Unless West Ham are able to finish in the top-four this season, which isn’t entirely out of the question but still unlikely at this time, the Hammers will not be playing in the Champions League for at least two seasons, but likely longer.

That would take Kostic to 32-years-old and his chances of playing Champions League football seriously diminished if West Ham still aren’t competing at the top table by then.

David Moyes has transformed West Ham into a club that can now realistically look at the Champions League and believe it to be a competition they can qualify for, but it remains some way off for now and Kostic will be wary of sacrificing something he worked so hard to achieve for a project that is likely to take longer to be a success than the length of this contract in England.