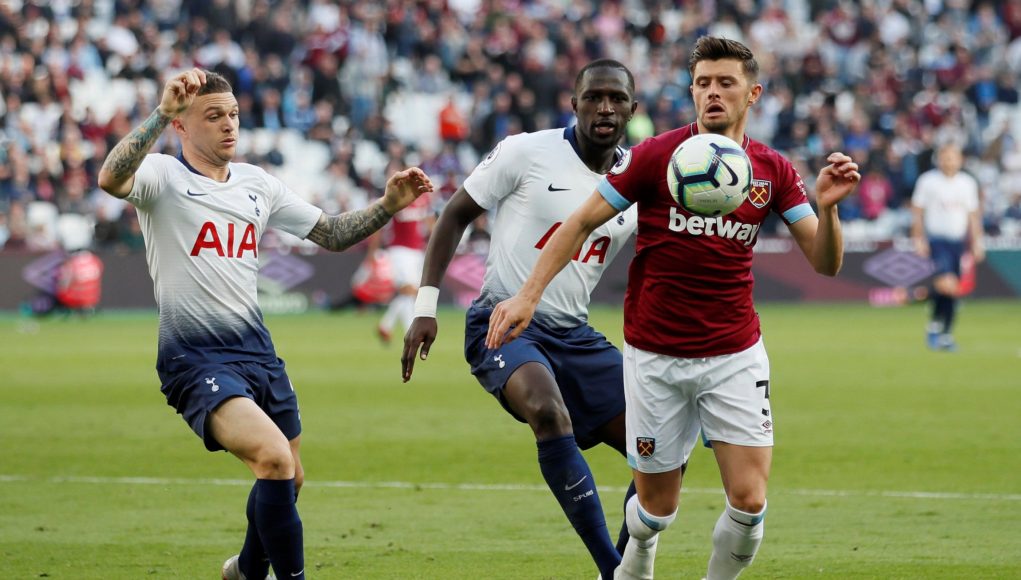 In our last game, we played very well in patches, but on two occasions we allowed Leicester to equalise.

The highlight of the game was a tremendous towering header by Michail Antonio, which left Kasper Schmeichel grasping at thin air. Together with Fabian Balbuena and a determined Arthur Masuaku, these were our three best players on the day.

A 4-1-4-1 formation was deployed against Leicester. This formation can be very effective but requires a very committed lone striker (in this case Marko Arnautovic, who was hardly seen all game) and mobile midfielders who are able to provide adequate central support to the defensive midfielder, who is usually positioned just ahead of the back four.

For this game, which is critical for Spurs in keeping their top four hopes alive as well as maintaining their momentum into the Champions League semi-final, I am suggesting we approach the game in two ways.

The first and more simplistic approach is to revert to a true and well proven 4-4-2 line-up. 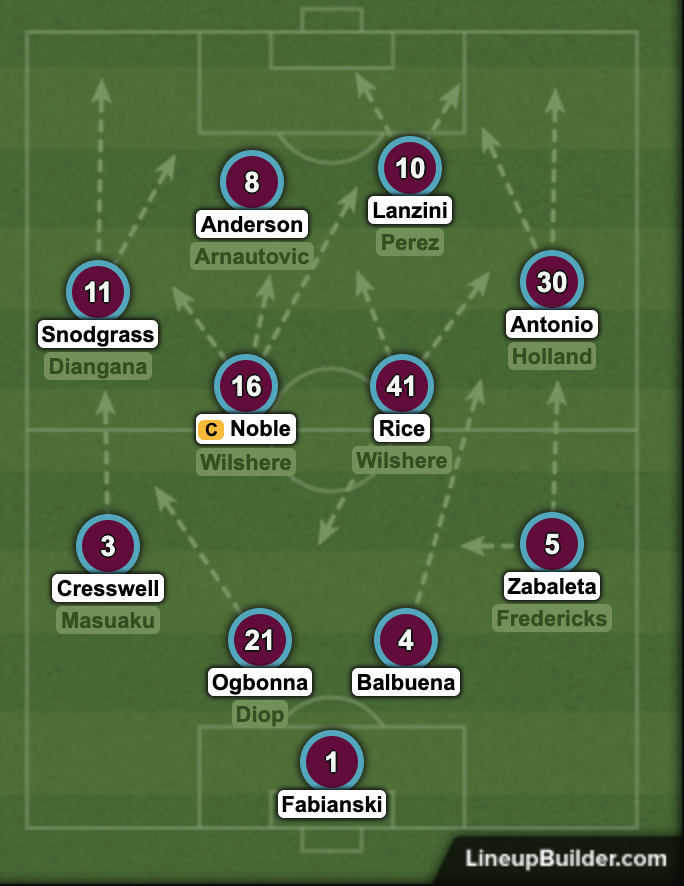 In this formation, I have made alterations which are intended to bolster our midfield and improve potency up-front by the inclusion of a second striker.

While it is nominally a 4-4-2, I have pushed an in-form Antonio into an advanced right attacking midfield position to join Felipe Anderson and Manuel Lanzini as our nominated strikers.

Arnautovic would normally be an automatic selection as one of our strikers, but his performances since the China transfer debacle do not warrant an automatic start. 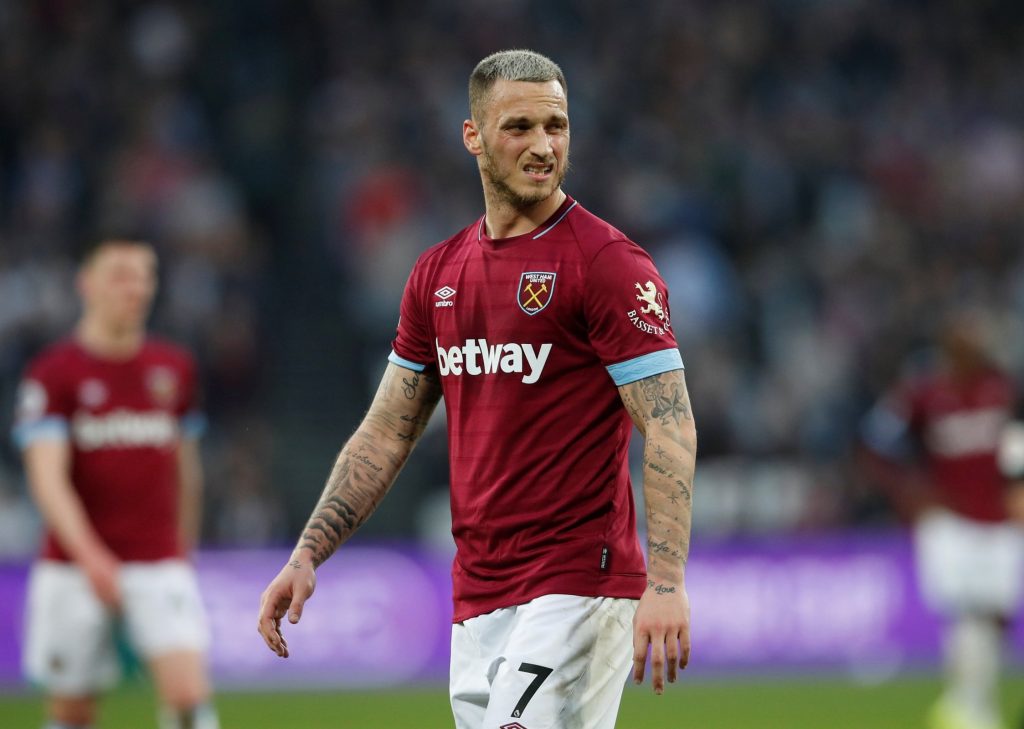 If the Lanzini-Anderson combination fails to fire, then Arnautovic or a sharp looking Lucas Perez could come off the bench if we are lacking in penetration. I am making the assumption that Aaron Cresswell will be fit to take over from Arthur Masuaku, who acquitted himself very well against the Foxes.

Objectively speaking, this formation looks to be an improvement on the maladaptive 4-1-4-1 formation that was unable to hold out Leicester during the critical periods when our central midfield looked very thin in counter-attacking moves.

I may be satisfied enough to be confident that this 4-4-2 formation would be good enough to gain all three points against Leicester if that game was replayed again this weekend. However, the harsh reality is that we are facing a very strong Spurs team, which despite the loss of Harry Kane, were good enough to topple Manchester City in the Champions League. 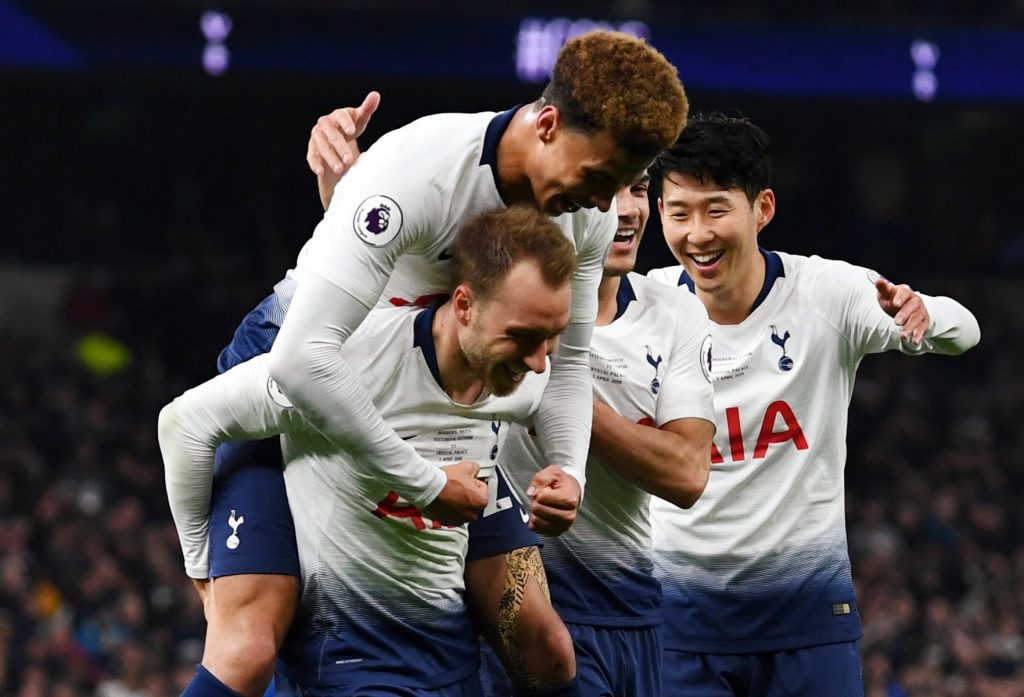 Son Heung-min has been in sensational form up front and has been well aided by the likes of Christian Eriksen, Lucas Moura, Erik Lamela and Dele Ali.

Most non-West Ham observers may shrug their shoulders and say we face an impossible uphill task this weekend. However, there are two important factors which give us some glimmer of hope against daunting odds.

First, is our incredible reputation to play very well against top clubs in the direst of circumstances. As each season approaches its inevitable climax, I am always reminded of what happened in the 1980 FA Cup Final when we beat Arsenal in a stunning game, where Sir Trevor Brooking scored a brilliant headed goal out of nothing and won us the cup.

In addition, we are now managed by Manuel Pellegrini, who used a very avant-garde formation, known as the ‘Magic Rectangle’ to good effect when he was coaching Villarreal, Real Madrid and Malaga in La Liga. 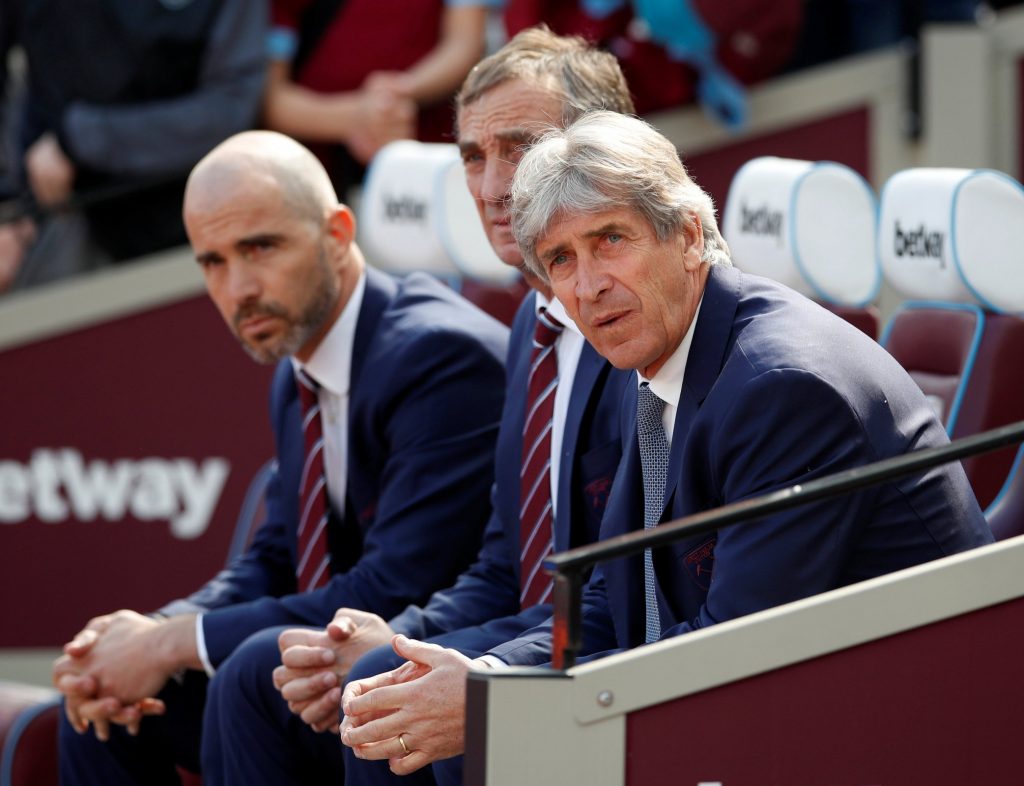 The so-called Magic Rectangle was first used by France under Michel Hidalgo at the 1982 World Cup and again in Euro 1984, and then later again by Henri Michel at the 1986 World Cup.

The magic rectangle is formed by combining two box-to-box midfielders with two deep-lying forwards across the midfield. This provides a unique balance in the distribution of possible moves and adds a dynamic quality to midfield play.

It resembles the famous 4-2-4 formation, which was used to brilliant effect by the Brazilian national team which thrashed Italy 4-1 in the 1970 World Cup Final, arguably the greatest World Cup final victory of all time.

Let’s check these tactical options out in further detail and decide whether manager Pellegrini may look into his past to provide a touch of tactical prowess with the magic rectangle. 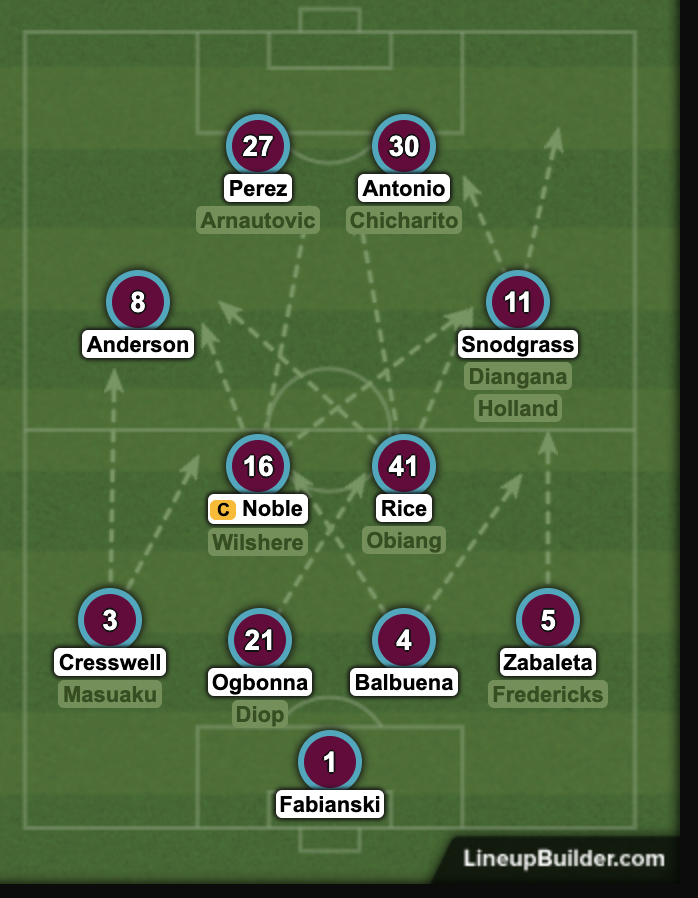 The formation follows the convention of a solid back four ahead of Lukasz Fabianski, similar to the players used in the above 4-4-2 shape.

In defensive midfield, I have selected Mark Noble to partner Rice, to buffer the expected workload of our nominated defenders.

Ahead, I have selected Anderson and Robert Snodgrass to make up the rectangle proper. All four players will be called upon to run themselves into near oblivion while ensuring accurate passing all over the park.

There is no space for tired legs and the likes of Jack Wilshere, Pedro Obiang, Grady Diangana and Nathan Holland could all come into the reckoning if and when fatigue sets in.

Snodgrass could easily switch flanks for a tiring Felipe Anderson and Diangana or Holland could easily adopt right-flank positions if required. 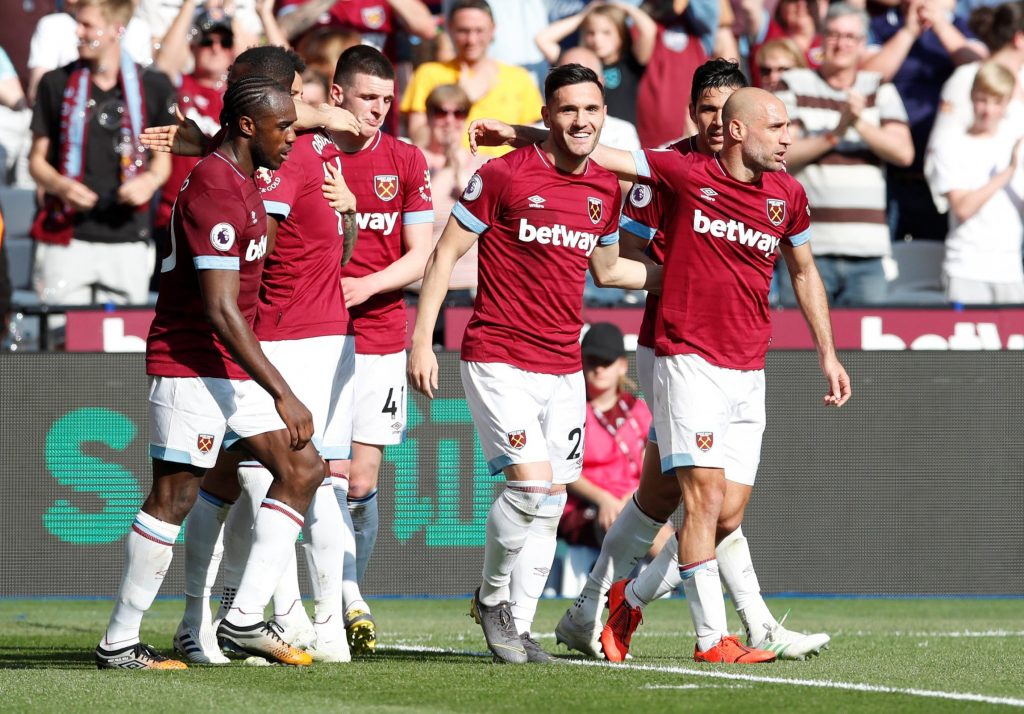 I have selected Perez and Antonio to start up front together with the possibility of Arnautovic or Chicharito being used late in the game. Antonio is the in-form man for selection and I thought that Perez looked sharp enough to gain selection ahead of a lethargic Arnautovic, who still seems to be struggling for form.

If we travel with good intention and focus, this could be a very entertaining match with lots of goals on offer. However, we can’t afford the luxury of allowing Spurs to gain the initial momentum and glut of possession.

An away win would go a long way to restoring much-needed team morale.