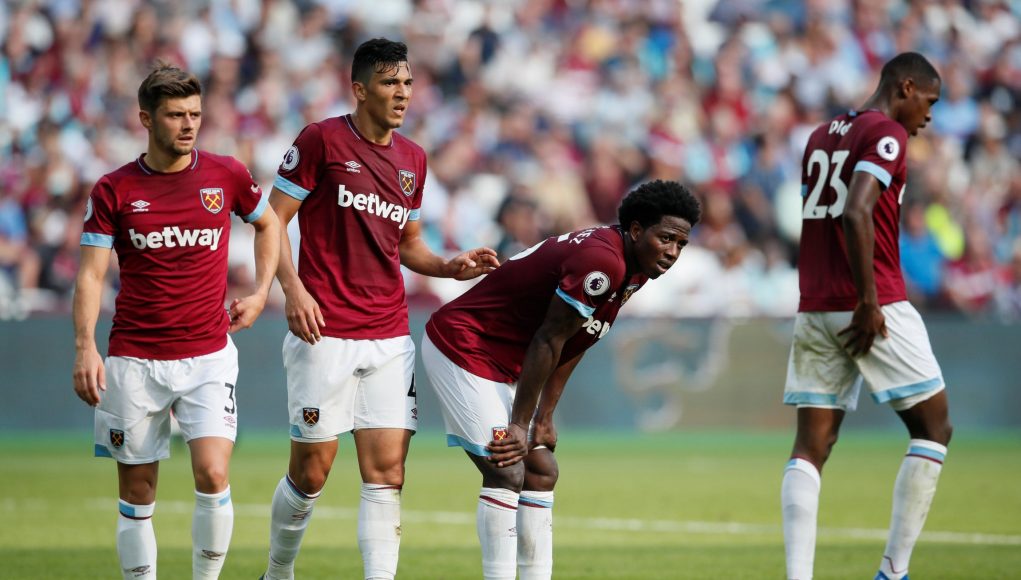 With the appointment of Manuel Pellegrini in May and the splashing out of around £100million on an array of talented players, there was plenty of reason for optimism at West Ham going into the new season.

However, four straight Premier League defeats to start the season and that optimism has quickly waned. So why have West Ham struggled so far and what can be changed to turn their fortunes around?

So far this season it is already clear that Pellegrini isn’t sure what his best team is yet. In the four Premier League games to date, he has never put out the same team more than once. Seventeen different players have started for West Ham already with four changes made between games against Liverpool and Bournemouth and between Bournemouth and Arsenal games.

This is partly understandable as nine first team players were been signed over the summer and few players so far this season have shown any level of consistency to warrant a regular starting place.

Having said that, you only have to look as far as teams like Watford and Wolves who have played the same team for every single game so far this season, to realise that you need a consistent starting XI in order for players to gel and results to come.

When he was first appointed, Pellegrini promised fans attractive, attacking football that has become his trademark style over the years. Part of this system involves a defensive line that doesn’t stray beyond the 18-yard line in order to play opposition attackers offside – something we saw on a regular basis with his time at Manchester City.

Trying to deploy such a line is admirable. However, attempting to use it against a deadly Liverpool side with slow centre backs in the form of Fabian Balbuena and Angelo Ogbonna is tactically naïve at best. Such a system left us brutally exposed to Liverpool’s brilliant attacking trio, eventually leading to an embarrassing 4-0 hammering. 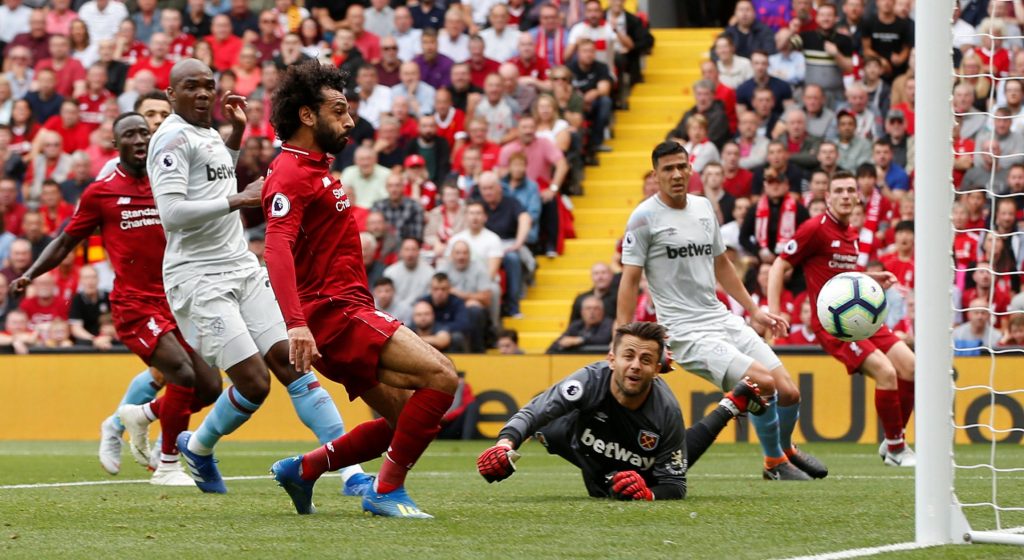 To make matters worse, a statistic has recently emerged showing that West Ham have covered only 421.59km so far this season – the third lowest distance in the division. Moreover, Wolves, Liverpool and Arsenal all completed a higher percentage of passes in their own half against West Ham compared to any other opposition this season.

These statistics are damning and not consistent with a high pressing style that you would expect of a Pellegrini side. The combination of a high defensive line without significant pressure on the ball is tactical suicide and may explain why West Ham have already shipped 10 goals so far this season.

An imbalanced side with a lack of mobility in midfield

One major thing that has already become clear this season is that there is a distinct lack of balance to this West Ham side. For all the attacking talent at Pellegrini’s disposal, West Ham’s defence has been left wide open at times due to a lack of defensive cover from the midfield.

So far in the Premier League, Pellegrini has deployed either two defensive midfielders in a 4-2-3-1 system or two central midfielders in a 4-4-2 system. However, against Liverpool, the holding midfielders of Mark Noble and Declan Rice were both brutally overrun by the three midfielders of James Milner, Georginio Wijnaldum and Naby Keita; so much so that Rice was hauled off at half time.

Moreover, against Bournemouth, a centre midfield partnership of Noble and Jack Wilshere was exposed for one particular trait – a distinct lack of mobility. This was epitomised by Callum Wilson’s goal where Noble makes a pathetic attempt to keep up with the pacey striker, allowing him to run straight at the heart of the West Ham defence and score.

What needs to change? 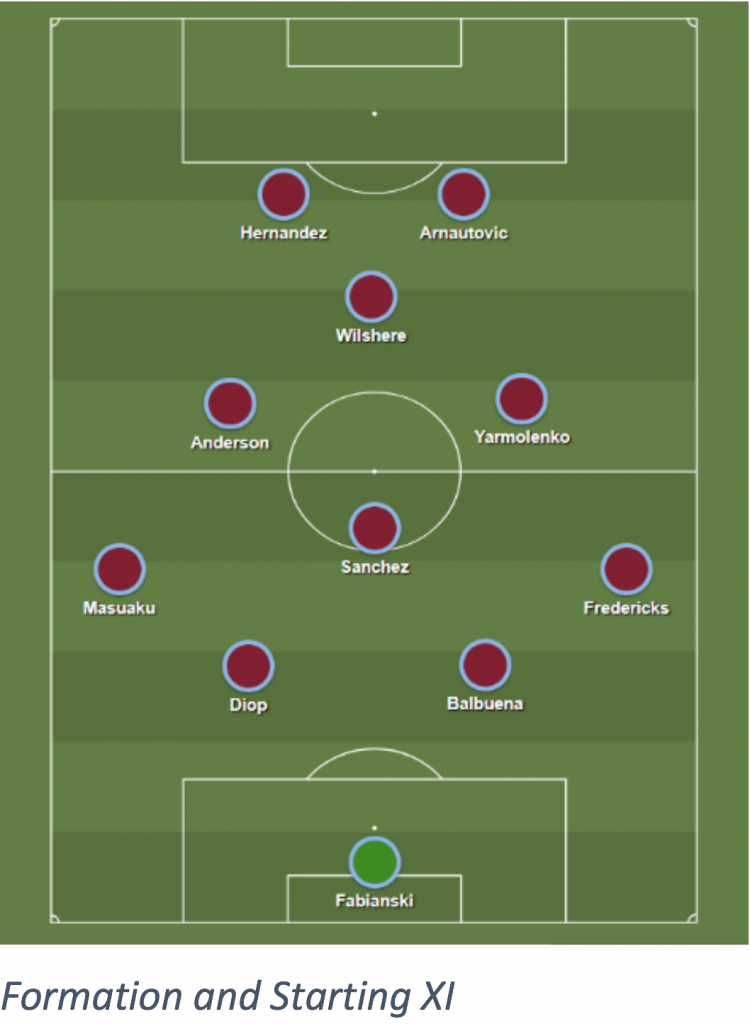 Firstly, West Ham need to play with two strikers up front. As you can see in the image below, when Wolves were in possession in deeper areas, Marko Arnautovic would press the opposition’s goalkeeper or centre backs in an attempt to win back the ball or force an error.

However, far too often he did this by himself with no cohesive pressing support from the midfield behind him. This meant Wolves were easily able to play out from the back under little pressure and pass the ball quickly into their midfield in order to start attacks. 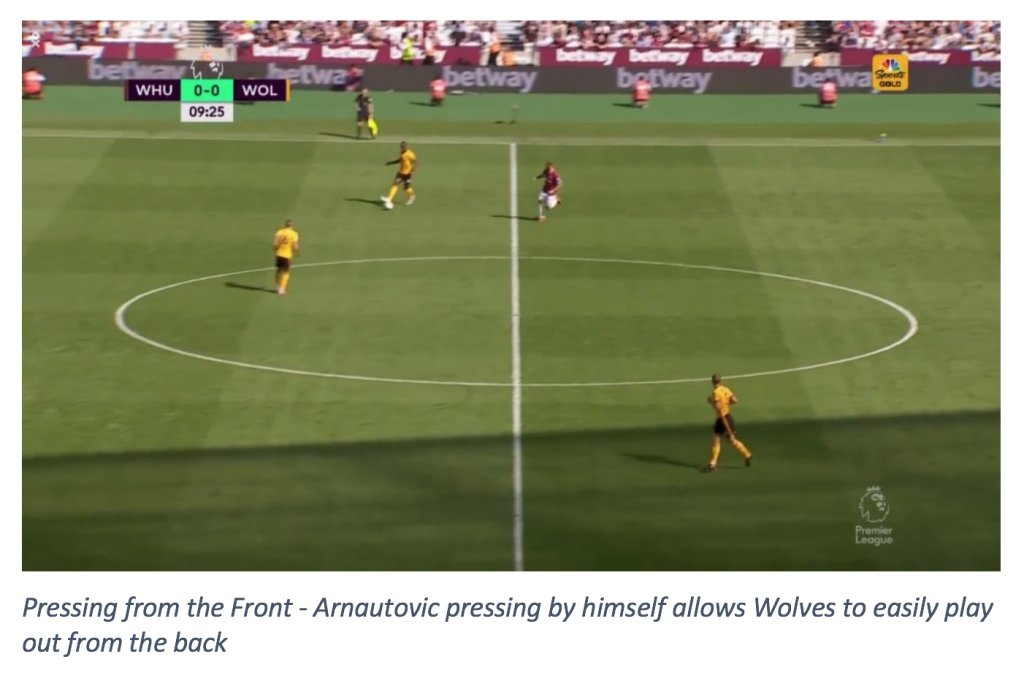 For a pressing system to work effectively, the team must press as a collective unit in order to block off passing routes and create pressing traps. If Javier Hernandez was to play up front alongside Arnautovic, the pair would be able to press opposition centre backs simultaneously with the midfielders behind stepping up to block off passing routes to full backs or into the midfield. This would force opposition goalkeepers into conceding possession or attempting inaccurate long balls. 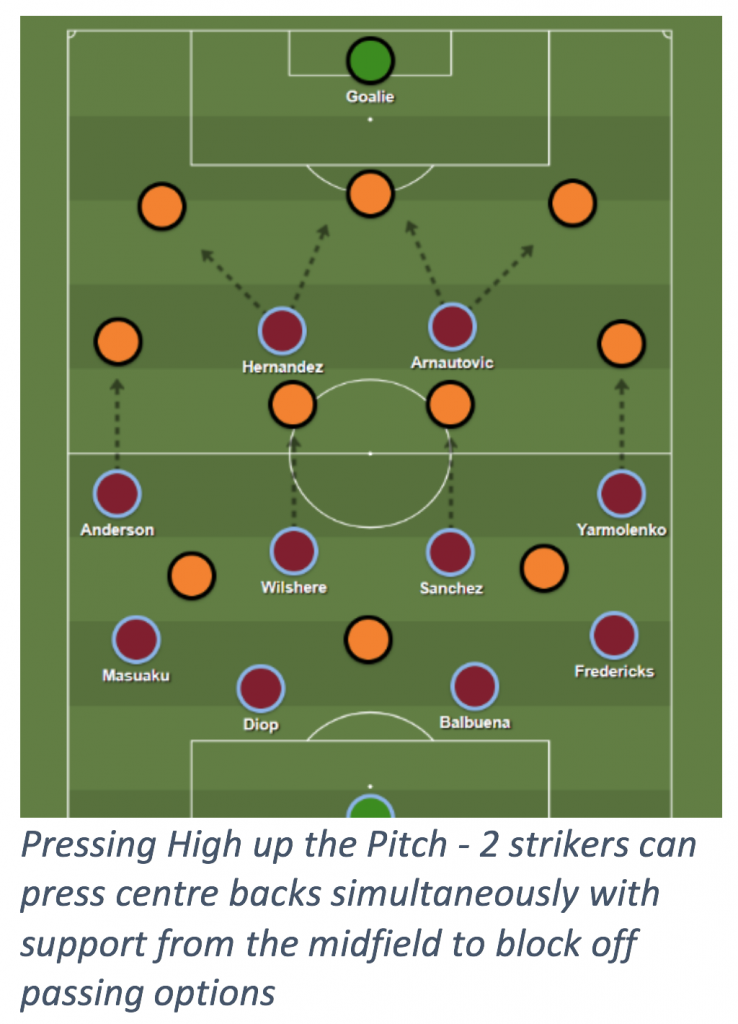 If this pressing system was to be deployed properly, the high pass completion and low distance covered statistics mentioned above would soon change. Besides pressing, Arnautovic and Hernandez linked up well against Bournemouth, particularly in the first half, and managed to create a couple of good chances.

Given time, this strike partnership could provide plenty of excitement for West Ham fans in the future.

One of the major benefits of playing a diamond shape in the middle of the park is that it allows Wilshere to play in his best position, which is centre attacking midfield.

By playing here, he is able to have a greater influence on the game than in central defensive midfield, with through balls into the two strikers or by spraying balls into wider areas as he did effectively against Bournemouth, particularly in the first half.

Also, a diamond shape slightly alters the positions in which the wide men of Felipe Anderson and Andriy Yarmolenko play. When playing a diamond, the wide midfield players tend to play slightly narrower than usual. This allows them to attack the half spaces found between the wide channels and the central area of the pitch. 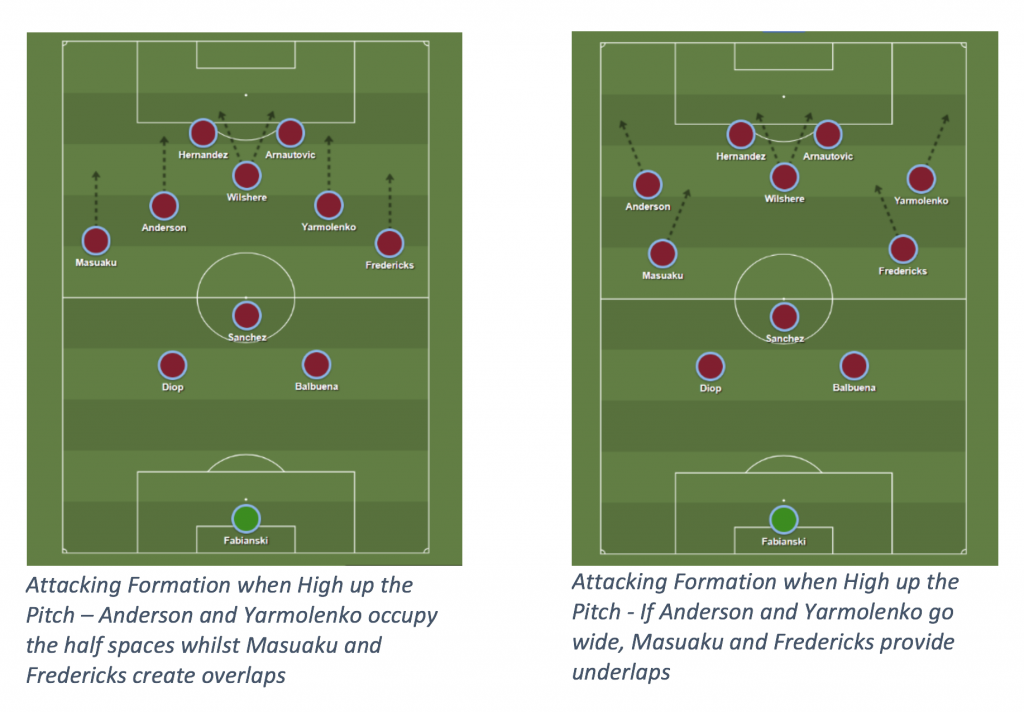 By playing this system, every channel of the pitch is occupied at the same time. When attacking this means that multiple passing options are always available, which allows the team to overload the opposition and create opportunities going forward. 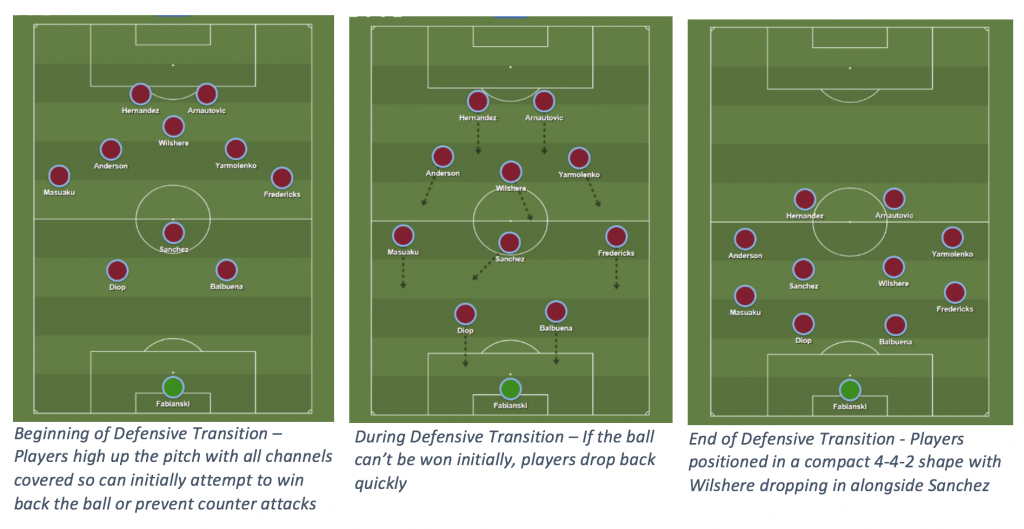 By playing a 4-4-2 diamond formation, it means that one central midfield player occupies a deeper role in the middle of the park compared to a flat 4-4-2 shape, which was seen against Liverpool. This creates a better balance to the side in providing greater protection for the centre backs by significantly reducing the space between the midfield and the back four.

In order for the system to work, the player in this role must be disciplined in sitting in front of the two centre backs and rarely straying forward to join the attack. So far this season, Noble has played poorly in this position as his lack of mobility has been exposed. However, Sanchez has performed surprisingly well in this role with notable displays against both Arsenal and Wolves, deserving a place in the team for now. However, if his form were to dip, Pedro Obiang and Rice could be fighting to replace him.

It can often take time for a new group of players to gel and understand the system a manager wants. However, if West Ham don’t start to improve soon, then the pressure will only continue to mount. They now have a big game coming up against Everton, where a result is desperately needed.