Swansea took advantage of some poor West Ham defending as they continued their impressive start to the Premier League season.

West Ham goalkeeper Jussi Jaaskelainen allowed Angel Rangel’s tame shot to wriggle under him and into the net to open the scoring on 20 minutes.

Then just nine minutes later James Collins under hit a back pass, which left the impressive Michu through on goal to make it 2-0.

Danny Graham completed the scoring when he slotted home from a low Wayne Routledge cross just after the hour mark.

West Ham started well and almost took the lead when new club-record signing Matt Jarvis whipped a dangerous ball into the box, only to see Kevin Nolan unable to make a connection with just three minutes on the clock.

The should have been the sign of things to come from West Ham, but a lack of concentration at the back ultimately cost them their right to claim anything from the game.

Nathan Dyer’s through ball found full-back Rangel in the West Ham penalty area and his shot, which could’ve have been a cross, managed to find its way underneath the flailing Jaaskelainen and into the net.

Swansea then doubled their lead nine minutes later when Michu capitalised on a weak James Collins back pass and all he needed was one touch to slot it home to double Swansea’s lead.

West Ham appeared to have woken up after their two defensive mistakes and Jarvis almost capped his debut with a goal when his left foot volley from inside the area was palmed away by Michel Vorm.

A strong finish to the half from West Ham could have seen them get back into the game, but Carlton Cole saw his header cleared off the line in stoppage time.

The home side came out the strongest in the second half and they were rewarded with a third goal on 64 minutes when Danny Graham latched on to a Routledge cross from the right, despite defender Guy Demel’s best efforts to get himself in the way.

West Ham barely threatened in the second half, allowing Swansea to sit comfortably on their three goal advantage and add to their 5-0 opening day win at QPR. 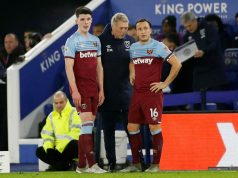 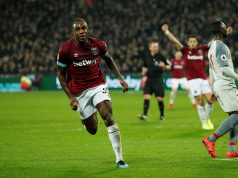 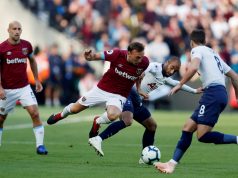 West Ham have plenty of positives to take despite Spurs defeat