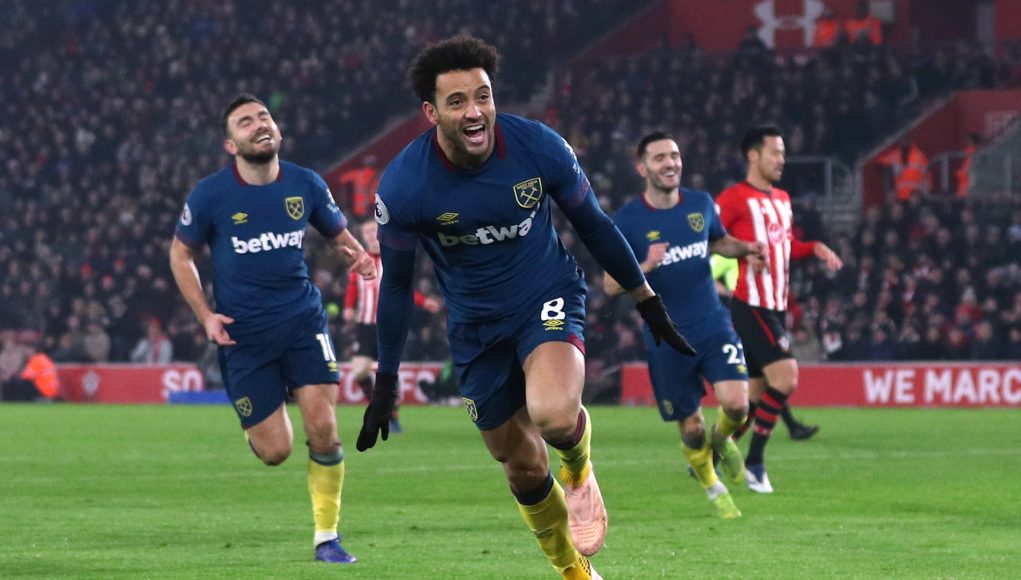 Southampton travel to London on Saturday, having achieved a 3-3 draw against Bournemouth in their last game.

After the final whistle, the Saints were very happy knowing that they had staved off relegation to the Championship. Ralph Hasenhüttl, was effusive in his praise, but for what reason other than relief from the drop?

Southampton have not looked good in defence, having leaked 11 goals in their last six games. They will face a West Ham side full of confidence after the terrific 1-0 away win against Spurs. Our performance in the second half was tremendous, showing a degree of organisation, which was always there but never came to fruition earlier on in the season.

Only luck and some fantastic goalkeeping from Hugo Lloris stopped Michail Antonio getting a second goal. Issa Diop, Declan Rice, and Ryan Fredericks also came perilously close on a day where the score-line could have sky-rocketed. Our overall balanced performance augurs well for next season and I am confident that we will press for a top six finish, assuming that the manager is given enough financial backing for summer transfers and can keep the nucleus of the present first team squad intact. 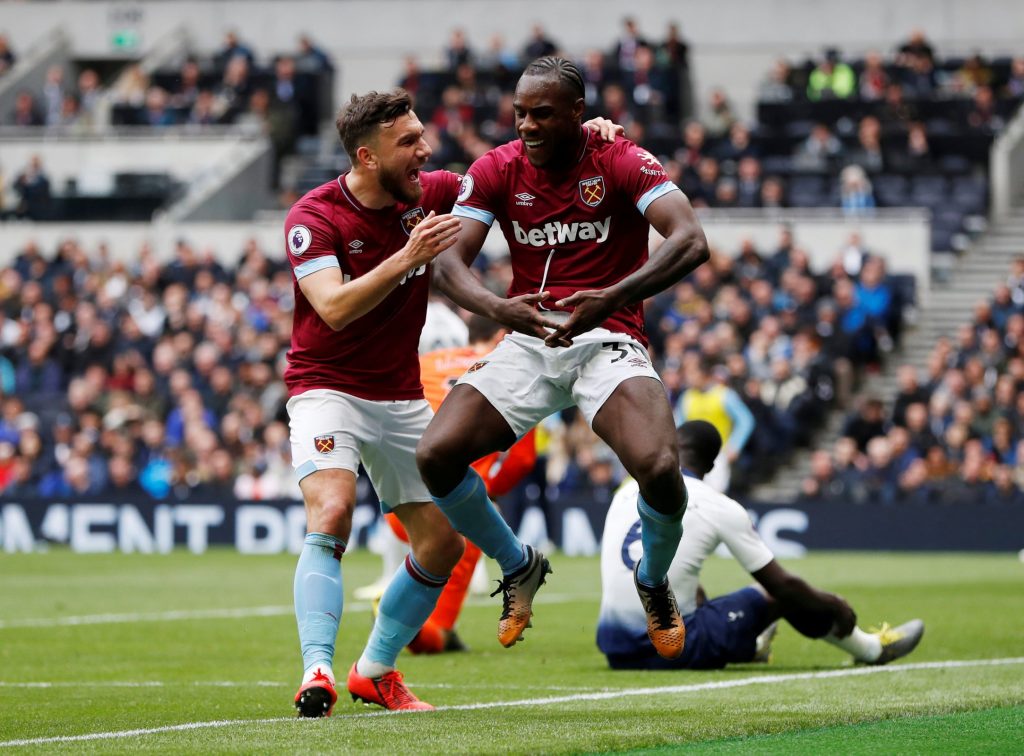 While we have every right to feel confident following the Spurs game, we are playing a team that, for the most part, has struggled this season and it is important that we don’t fall asleep against the likes of Danny Ings, Nathan Redmond, James Ward-Prowse and Shane Long.

I am suggesting that we keep the same starting line-up with the possibility of Aaron Cresswell and Manuel Lanzini getting some playing time. Likewise, we have no reason to deviate with the ultra-attacking 4-3-3- formation which impressed so much last Saturday. 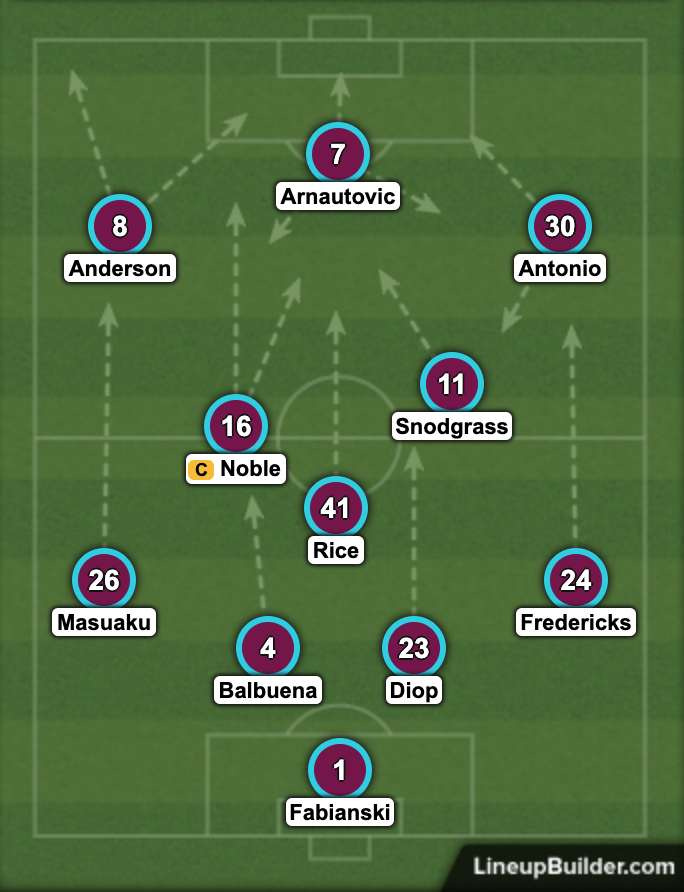 Lukas Fabianski was in sparkling form against Spurs and may go close to being named Hammer of the Year.  Fabianski’s timely interceptions kept us in the game against Spurs, and his angles when faced with one-on-one’s were tremendous.

Arthur Masuaku has been in terrific form of late, and I expect him to start at left back. On the other flank, young Ryan Fredericks has also looked very strong in defence and attack, and was close to scoring last week when he sent a swerving shot from distance that gave goalkeeper Hugo Lloris all sorts of trouble.

In the middle of defence, the combination of Issa Diop and Fabian Balbuena was in tremendous form. Issa Diop found himself one-on-one with Lloris and just missed on scoring a great solo goal. These two are probably our best central defenders at present and looked to have formed a very good understanding together, with Fabianski keeping a careful eye on both of their positional roles in set pieces.

Together with Declan Rice, they are also a handful at the opposite end of the park, in corners and free kicks. Southampton will have to be very careful in how they mark these players. 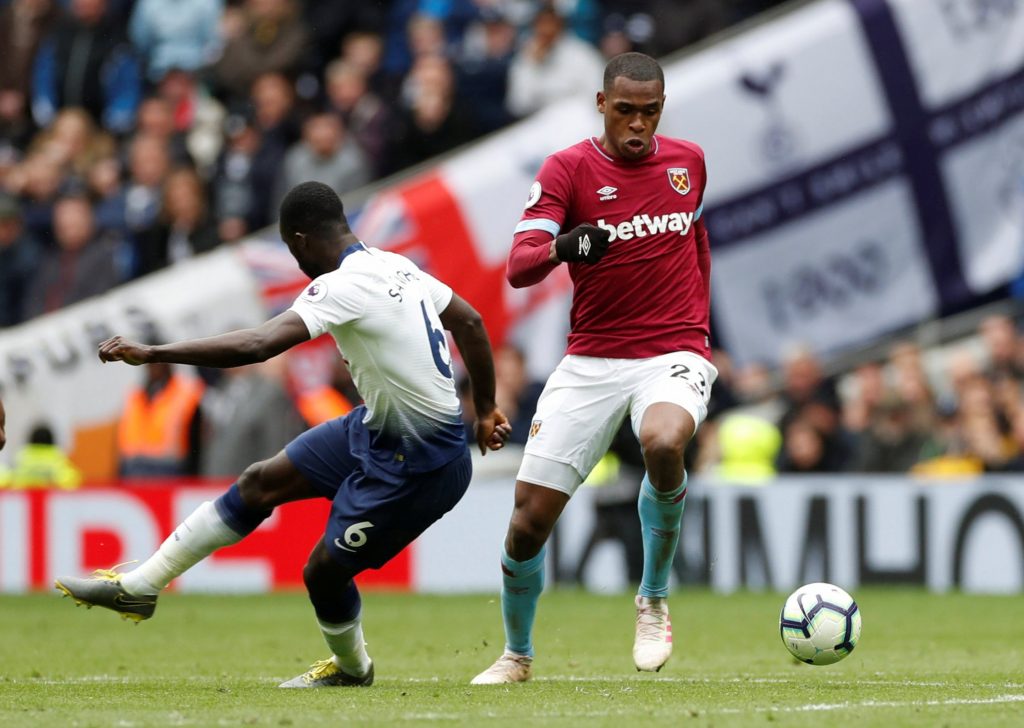 In midfield, captain Mark Noble has turned back the time clock and has been very sharp in recent games. His passing in the Spurs game was good and he read the game very well. Declan Rice continues his dizzying progress in central defensive midfield.

Robert Snodgrass is again back to his best and I think he may score a goal or two himself in the next two games, as well as swinging in his great corner kicks, which are so hard to defend. He is a natural adventurer and likes to link up with the strikers. He has become very hard to shake off the ball.

Last week, Marko Arnautovic turned up to play as central striker and was a constant thorn in the Spurs defence. It was his clever flick which led to Antonio’s great goal from an acute angle. Antonio has been causing left backs no end of problems in recent games and has been so strong in attack. Felipe Anderson turned it up a notch against Spurs and always looked capable of scoring. That said, he is still capable of greater deeds and in good time we will see them.

Our main tactical goal is to keep moving, on and off the ball; avoiding the dangerous and futile vertical and horizontal passing which so often ends up in misery. It sounds so simple, but how effective are those dazzling diagonal passes which cut through our moving triangles as we press forward; so simple, but so effective as football history has proven.

I think that Manuel Pellegrini is going to encourage the lads to put on a really good home display for the benefit of the home crowd in the last home game of the campaign.

If some of our promising players can adjust their shooting a bit, there could be goals galore. Southampton may score but probably not enough.

Let’s give the players in the West Ham Women’s Team a big cheer from all of us across the globe, as they attempt to create history on May 4th when they face Manchester City at Wembley in the FA Cup Final.

Win or lose, they have all done the club and the fans so proud this season.