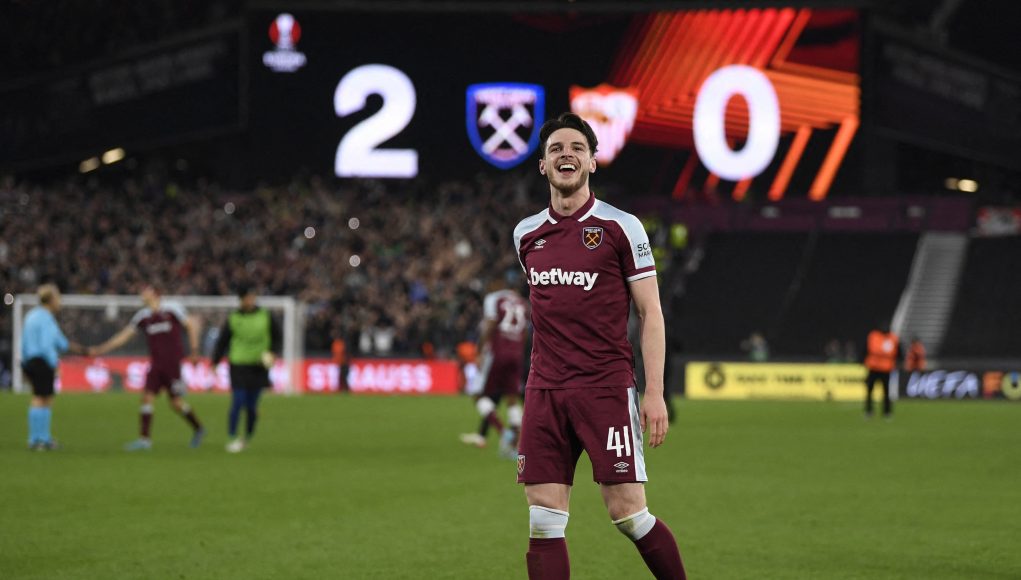 Former West Ham player and coach Stuart Pearce has insisted there is “no chance” Declan Rice will leave the club this summer.

Pearce was one of David Moyes’ trusted coaches over the last two years before leaving the club at the end of the 21/22 campaign, which means he’s well placed to make comment on what he thinks about Rice’s immediate future.

As we all know, Rice has been heavily linked with a mega-money move away from the club over the last couple of years, with one report in May claiming a bid of £120m would be enough for West Ham to accept.

West Ham and Moyes have always been adamant that they will not sell, explaining that it would take a huge transfer fee for them to even consider parting ways with their star man.

And Pearce, who is a regular pundit on talkSPORT, has echoed those views on air this week.

When asked whether Rice could leave West Ham this summer, Pearce responded: “No, no chance!”

And then when asked whether or not the transfer fee on offer would make a difference, he continued: “No, it’s irrelevant. If you’re talking [Kalvin] Phillips going [to Man City] at £45m, you’re talking [Raheem] Sterling going [to Chelsea] for £45m, what are West Ham going to do with £45-50m, it’s a waste of time. Absolute waste of time.

“I mean Dave’s [Moyes] been adamant, the board have been adamant at West Ham that Declan’s going nowhere and Dave’s going to build a team around him.

“And you take him out of that midfield, as we saw in the Hungary game. A 4-0 defeat, no Declan Rice, all of a sudden we got a little bit exposed.

“Not a chance he’s leaving.”

When someone as in-the-know as Pearce makes those comments, it’s hard to see a scenario where Rice does eventually leave this summer. Of course, we have to expect him to eventually move on, especially if we don’t start winning trophies or competing in the Champions League.

But keeping hold of him for at least one more season could be crucial to making giant steps towards actually achieving the things that might eventually convince him to stay long term.

Let’s hope Pearce is bang on with his comments – I trust that he is!