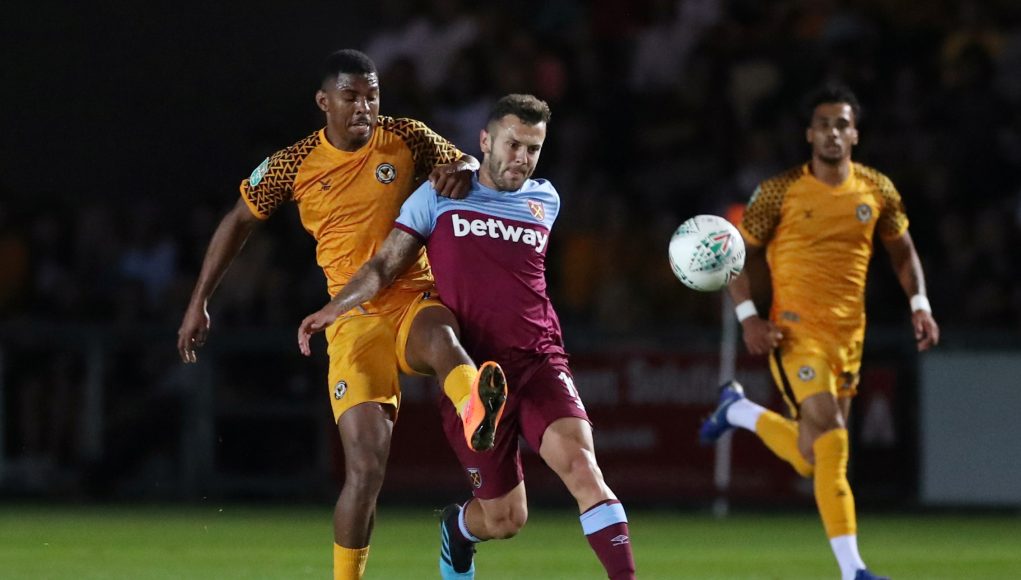 Jack Wilshere starred in West Ham’s 2-0 victory over Newport County on Tuesday night and there were plenty of positives to take from his performance.

The 27-year-old, who started the Hammers’ opening two Premier League matches, was dropped from the squad entirely in West Ham’s 3-1 victory at Vicarage Road but returned to the starting XI at Rodney Parade in Carabao Cup action.

Despite a disappointing first-half performance from Manuel Pellegrini’s side, Wilshere scored on the stroke of half-time to set the Hammers up for a comfortable second half – dictated by the England midfielder.

Wilshere’s first competitive goal in Claret and Blue gave him an evident boost of confidence and he was a stand-out performer on the night.

The England midfielder was constantly trying to break through the midfield line Newport held, completing three dribbles over the course of 90 minutes – second highest to Felipe Anderson.

Also, he was the most fouled player by some distance among the West Ham ranks and was taken down four times in the match, three more than any other player in a Claret and Blue shirt. Newport realised his capabilities with the ball at his feet and tried to limit that as much as they could; if that meant fouling him then so be it.

Wilshere’s defensive contributions were much better. The 27-year-old ranked joint-top for tackles (2) and constantly attempted to overturn possession of the ball.

And, of course, his passing display was very solid. Throughout the first half he struggled and was guilty of giving possession away rather easily, but the second half was a different story. Overall, Wilshere made 67 passes with a pass accuracy of 85.1%.

So, with Norwich City on the horizon, could Wilshere be in line to start?

Despite his solid performance, I would be surprised to see him start given the excellent performance of Mark Noble at the weekend. However, with Michail Antonio’s hamstring injury, Pellegrini could find a way to slot the 27-year-old into the action.

The Chilean manager could be tempted to try a midfield trio of Declan Rice, Noble and Wilshere; pushing Manuel Lanzini onto the left flank with Felipe Anderson operating on the right.

Although Wilshere was gifted with the Man of the Match award by Sky Sports, I do not feel he did enough to push Noble out of the starting XI.

Yes, he was impressive for the majority, but he will have to do a lot more if he wants to be a regular starter in the Premier League.