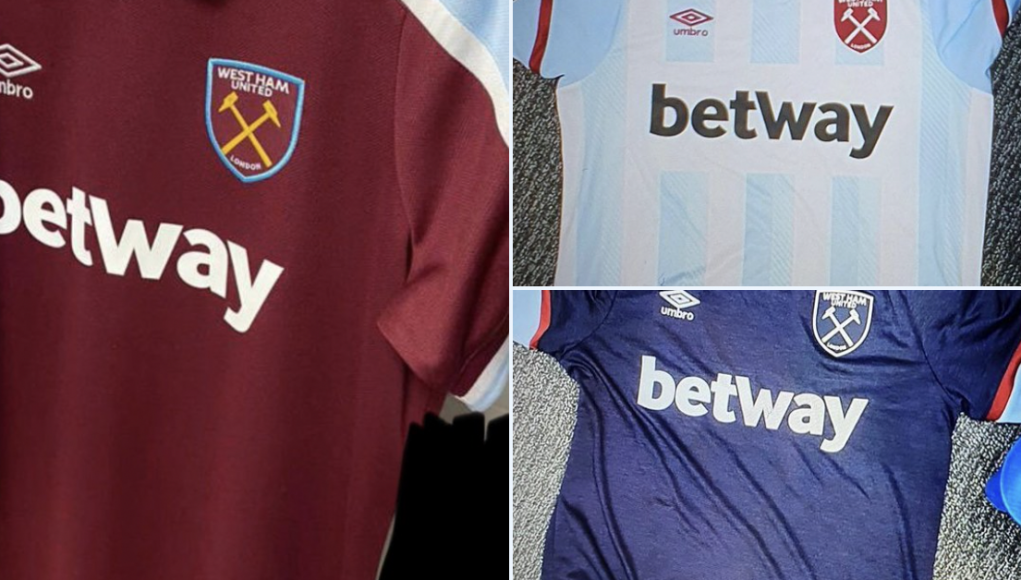 West Ham’s three new Umbro kits for the 21/22 season appear to have been leaked on social media.

It’s that time of year when leaked images of the new kits and/or concept designs begin to do the rounds on social media as fans eagerly anticipate the official release of the new season’s strips.

Three images have been doing the rounds over the last 24 hours that certainly look like real photos of actual West Ham kits, and it’s believed these will be the ones the club with officially reveal in the coming days or weeks.

As you can see from the tweet below, from @Hammers_Update, the home shirt appears to be a bit of a throwback to the 1999/2001 Fila shirt, with the bold sky blue shoulder stripe, white trim and collar. Of course, that strip was made iconic by Paolo Di Canio and his greatness, so it’s a nice tribute to what were two pretty good years at West Ham.

NEWS: These are West Ham’s 2021/22 Home, Away and Third kits pic.twitter.com/rgU63iOopC

The away looks like another throwback, this time to the 92/93 Bukta shirt, with white and sky blue stripes, claret trip and claret collar. Designs for away kits are often recycled over the years, white the classic claret hoops on sky blue shirts or all-white strips often being regurgitated, but this particular design hasn’t appeared since the early 1990’s, so it’s a refreshing feel to our look away from home.

And the third shirt looks to be a royal blue number, with claret and sky blue trim on the sleeves and a crew neck. It looks pretty plain and without any bells and whistles but, if this is indeed the third shirt we’ll be wearing in 21/22, then it’s fair to say this one could be what we see quite often in the Europa League.

The club is expected to reveal the official shirts imminently but these leaked images give us a good idea of what to expect. The photos certainly don’t do them justice due to their lack of quality and off-lighting, but it’s nice to see Umbro giving us a throwback to 1999 when we last finished in the top six.

Maybe this new one will become an iconic shirt as well? Let’s hope so!