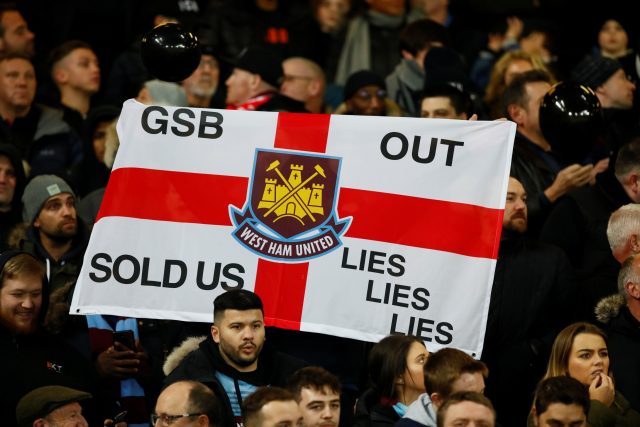 Despite the fantastic season we’ve just enjoyed, it has not changed anything between West Ham’s owners and the fans.

The slogan amongst the fans has been ‘support the team, not the regime’ and it’s one that remains, despite a top-six finish and Europa League qualification in 2020/21.

Having overseen a shambolic stadium migration from the Boleyn Ground to London Stadium, made several poor managerial appointments and wasted millions on sub-standard players over the years, it’s little wonder we’ve had to endure more relegation battles than fights for Europe during their tenure.

The stadium move was sold to the fans as the catalyst to bigger and better things, a world-stadium team for a world-class team was the line given to us by Karren Brady.

Instead, we followed up a 7th-placed finish in the final season at Upton Park to finishing 11th, 13th, 10th and 16th respectively, before finally arriving in the top six this year.

Put simply, the post-stadium move years have not been what the fans were promised and, as a result, the relationship between owners and fans is pretty irreparable. They moved us away from our spiritual home to rented accommodation for the exact same thing we were getting before, so it’s little wonder fans are angry.

And while things have improved on the pitch over the last 12 months, what has happened before isn’t forgivable in the eyes of many.

But former Premier League footballer, Carlton Palmer, doesn’t understand why fans give David Gold, David Sullivan and Brady stick after having pumped millions into the club over the years.

Palmer exclusively told West Ham World: “I don’t get that.

“Why have they got a lot of flack over the years? Gold and Sullivan have put fortunes into that football club.

“Unfortunately, Manuel Pellegrini spent a lot of money and it didn’t really happen, but I think Gold and Sullivan have put a lot of money into the football club and they’ve supported their managers.

“So I don’t know why they get the stick they get, I really don’t.”

Unless you’re a fan of the club, or paying close attention to what’s going on off the pitch, it’s little wonder pundits and rival fans alike often question why Hammers fans are so angry with the owners.

Most will simply look at the transfer spend and just assume the owners of the club are doing a good job, without taking a step back and actually looking at the bigger picture.

Unfortunately for GSB, the chance to improve the relationship with fans is all but gone. The damage has been done, regardless of what happens on the pitch from now on. It’s just going to take pundits and neutrals a bit of time to understand the real reasons why.