West Ham World
Home Homepage “How can you be that bad?” – West Ham star’s angry rant... 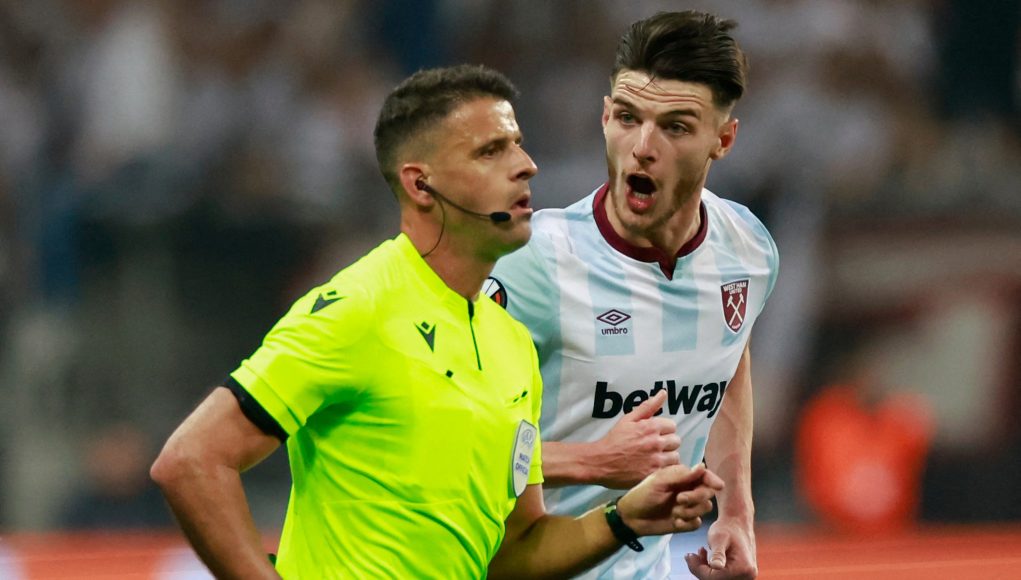 After crashing out of the Europa League semi-final to Eintracht Frankfurt on Thursday night, emotions were running high both amongst the playing squad and the Hammers fans.

Aaron Cresswell’s first-half red card all but ended any chance of us getting back into the tie after losing the first leg 2-1 in Stratford last week, but Rafael Borre’s 26th minute was essentially the final nail in West Ham’s Europa League coffin.

It was a frustrating tie, with nothing really going our way. Having hit the woodwork three times in the first leg to then being forced to play the best part of 75 minutes with 10 men in the second, nothing seemed to fall for us as we desperately attempted to reach a first European final since 1976.

And Declan Rice‘s frustration appeared to have got the better of him in the tunnel after the game, as he called after referee Jesus Gil Manzano to give him so choice words.

In the video below, tweeted by Odds Changer, Rice can be clearly heard shouting “Ref, it’s so poor. All night it’s so bad. How can you be that bad?”

He then goes on to accuse the referee of being paid and that corruption had a part to play in the official’s performance.

You can watch that video below…

Declan Rice with a few choice words to the referee in the tunnel last night..

While Rice certainly had a point in what he was saying, the fact he went on to make accusations of bribery and corruption might land him in hot water with UEFA and it wouldn’t be a surprise to see him fined heavily for his emotional outburst at Deutsche Bank Park.