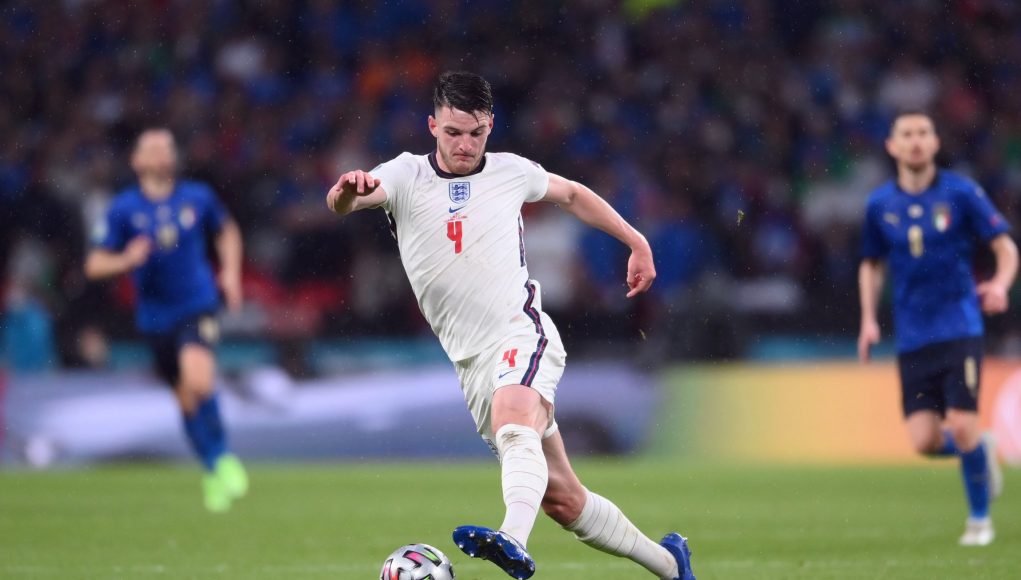 Rice was a crucial figure of Gareth Southgate’s history-making Three Lions outfit, which reached its first major tournament final for 55 years and came to within a penalty shoot-out of winning a first trophy since 1966.

Rice was a standout performer throughout and his performance in Sunday’s final against Italy, before being substituted for Jordan Henderson, was worthy of the Man of the March award.

And, along with several other members of the England team, Rice took to social media to address his followers and to reveal his pride in being involved in such a historic summer for English football.

In his statement, he said: “It’s difficult to put into words how I’m feeling this evening.

“I’m of course absolutely devastated with the result last night and need some time now to process the massive disappointment we are all feeling. To get so close is heartbreaking, and I know all of us around the country are hurting.

“However, the biggest emotion I am feeling is pride. I am so proud to be a part of this squad. The last four weeks I’ve had the best time of my entire life and the journey we have all been on together as players, managers, staff, fans and as a nation has been special.

“It’s been a true honour to represent our country at a major tournament and together we’ve all created memories that will last a lifetime.

“We win together and lose together, and although it’s painful today this is just the start for this squad and we will be back better, stronger and ready to go again.

“Thank you so much to everyone around the country for the incredible support for all of us during the whole tournament. Seeing everyone come together as we have over the last month has been amazing and I know there are great days ahead.

“We are all hungry for success and the future is bright for this group!!!”

Rice didn’t just make his country proud over the course of Euro 2020, he also made West Ham and Hammers fans immensely proud. He wasn’t just representing England, he was representing West Ham.

Despite increasing rumours of his immediate London Stadium future this summer, Rice remains a West Ham player and the club were quick to congratulate him after Sunday’s final.

And Hammers fans took to Twitter to respond to his statement, all professing their immense pride in what he’s achieved over the last few weeks…

What a great player you are Deccers. You had the better of Chiesa at times and he is world class! You should be captain of England. Good luck next year at the World Cup. I know England will be great! ⚒🏴󠁧󠁢󠁥󠁮󠁧󠁿⚒

You did yourself and us at West Ham proud Declan

What a star you were for the England team. Your passion was obvious. Onwards and upwards in the claret and blue now

Great run! Now for the ’21/22 season. Thank you for so many excellent matches.

A wonderful example of humanity. Well done @_DeclanRice from a fellow Hammer ⚒🏴󠁧󠁢󠁥󠁮󠁧󠁿⚒

Won’t be long before you’re leading them out on the field as captain mate. Only the beginning ⚒

Proud of you Declan you have represented us Hammers with heart, guts and determination ⚒⚒⚒