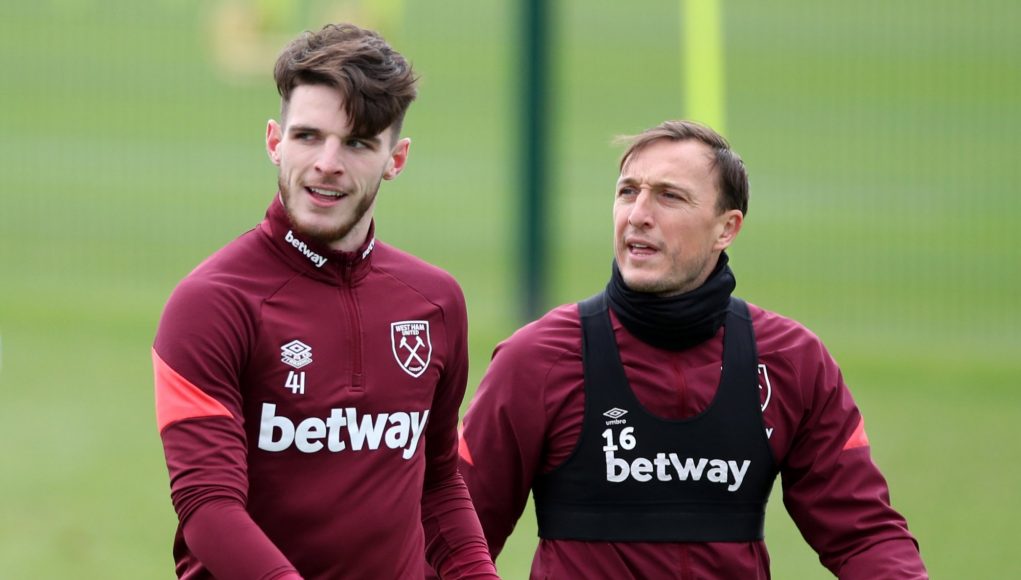 Declan Rice’s development over the last few seasons has been astonishing.

With every passing season, the 22-year-old has gotten better and better and is now not only one of West Ham’s best players, but also England’s.

His rise to becoming one of the world’s best midfielders has of course led to several links away to bigger clubs playing in the Champions League – which was to be expected – but right now, he’s a West Ham player and is continuing to improve both on and off the pitch.

Given the notoriety of West Ham’s academy, it’s no surprise that Rice has been compared with Mark Noble. Not when it comes to talent, but when it comes to leadership and influence in the dressing room, as well as representing the lifeblood of the football club.

The youngster made his 150th Premier League appearance for West Ham last weekend. In the same game, Noble came off the bench against Crystal Palace to make his 407th top-flight showing and 539th first-team appearance.

If Rice wanted to, he could one day surpass Noble’s achievements in claret and blue, but it wouldn’t be unfair to say his stock is rising quicker than West Ham’s, despite the Hammers’ transformation under David Moyes’ management over the last two years.

But Rice has recently credited Mark Noble as being one of the biggest influences behind his development over the years.

In an interview with the club’s official website, Rice said: “He’s such a good people person.

“Honestly, if Nobes weren’t around, I don’t think I would have been as successful as I’ve been at West Ham.

“You can speak to him about anything and if I do something wrong, even in training, he will tell me straight away. It makes me think, ‘Wow, he’s still on me’.

“He teaches me how to be a good person around the place, how to be with the lads, and if anything needs to be said in the changing room, you’ve got to say it. I feel like I couldn’t have had anyone better to guide me through.”